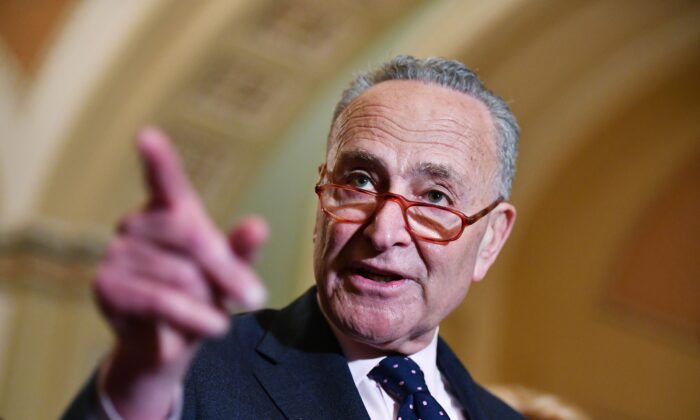 Senate Minority Leader Chuck Schumer speaks to reporters after a policy luncheon at the U.S. Capitol in Washington on Jan. 7, 2020. (Mandel Ngan/AFP via Getty Images)
Politics

Witnesses in Senate Impeachment Trial Might Not Help Democrats: Schumer

The witnesses that Senate Democrats want to testify in the Senate impeachment trial against President Donald Trump might not bolster their case against Trump, Senate Minority Leader Chuck Schumer (D-N.Y.) admitted on Tuesday.

Schumer criticized Republicans for wanting to start the trial without voting on witnesses, a precedent they’ve said was established during the trial against President Bill Clinton in 1999.

“Democrats have called—have asked to call four fact witnesses and subpoena three specific sets of relevant documents related to the president’s misconduct with Ukraine. At the moment, my Republican colleagues are opposing these witnesses and documents, but they can’t seem to find a real reason why. Most are unwilling to argue that witnesses shouldn’t come before the Senate. They can only support delaying the decision until most of the trial is over,” Schumer said on the Senate floor.

But he said he did agree with Senate Majority Leader Mitch McConnell (R-Ky.) that the witnesses Democrats have requested might not help the House managers’ case against the president.

Schumer was speaking after McConnell took to the floor and told his colleagues that the House rushed through the impeachment of Trump.

While the inquiry against Clinton “drew on years of prior investigation and mountains of testimony from firsthand fact witnesses” and the inquiry that led to President Richard Nixon’s resignation “took 14 months of hearings in addition to the separate special prosecutor,” the latest impeachment fell far short, McConnell alleged.

“The Constitution gives the sole power of impeachment to the House. If a House majority wants to impeach a president, the ball is in their court, but they have to do the work. They have to prove their case. Nothing, nothing in our history or our Constitution says a House majority can pass what amounts to a half-baked censure resolution and then insist that the Senate fill in the blanks. There’s no constitutional exception for a House majority with a short attention span,” he said.

“We’ve arrived at a simple contradiction. Two things cannot be both true. House democrats’ case cannot simultaneously be so robust that it was enough to impeach in the first place but also so weak that the Senate needs to go fishing. If the existing case is strong, there’s no need for the judge and the jury to reopen the investigation. If the existing case is weak, House Democrats should not have impeached in the first place,” he added.

The remarks came after House Democrats said the impeachment articles would finally be submitted to the Senate on Jan. 14, nearly a month after the House impeached Trump. It’s not clear yet when the trial will start.