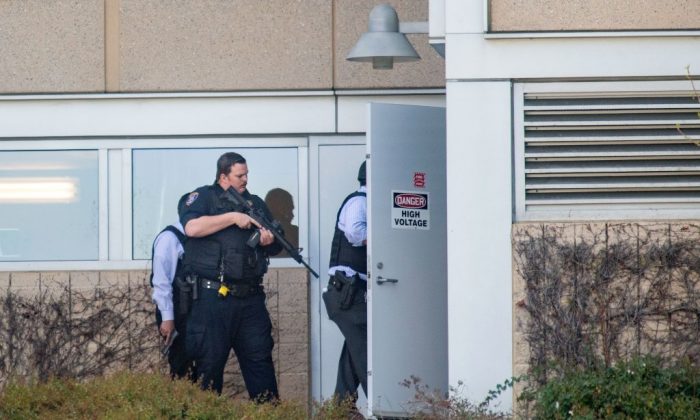 Police search a building at YouTube's corporate headquarters as an active shooter situation was underway in San Bruno, Calif., on April 03, 2018. (Josh Edelson/AFP/Getty Images)
US News

Witness to YouTube Headquarters Shooting: ‘I Didn’t Have a Gun on Me, But I Wish I Did’

A man who witnessed the shooting at YouTube headquarters in California on Tuesday said that he wished he had a gun on him.

The San Bruno Police Department said in a statement that a female entered the building and shot multiple people around 12:46 p.m. at the YouTube campus in the city.

Police officers responding to the scene found a female with a gunshot wound that’s believed to be self-inflicted as well as four people who were shot.

The shooter was later identified as Nasim Aghdam, a vegan activist who was angry at YouTube because she believed the company was discriminating against her videos, reported NBC.

“There is no free speech in real world & you will be suppressed for telling the truth that is not supported by the system. Videos of targeted users are filtered & merely relegated, so that people can hardly see their videos!” she added.

BREAKING: Just spoke to the father of Nasim Aghdam. He says his daughter had been missing for several days. When cops found her in NorCal last night, he warned them she was angry with YouTube. @CBSLA pic.twitter.com/mgCw9ivqos

Family members echoed the sentiments, saying that YouTube’s demonetization left the 38-year-old without an income.

One of the witnesses told Fox News that he wished he was armed.

The man said he was ordering food from a store across the street from the YouTube headquarters when the shooting started. He heard more than 10 shots.

The department said that evidence from the scene is being processed by detectives as well as the San Mateo County Crime Lab.

YouTube CEO Susan Wojcicki said in a statement, “There are no words to describe how horrible it was to have an active shooter YouTube today.”

There are no words to describe how horrible it was to have an active shooter @YouTube today. Our deepest gratitude to law enforcement & first responders for their rapid response. Our hearts go out to all those injured & impacted today. We will come together to heal as a family.

Here is the note that @sundarpichai just sent to Googlers worldwide. pic.twitter.com/bdC6KeTl9c

She added, “Our deepest gratitude to law enforcement & first responders for their rapid response. Our hearts go out to all those injured & impacted today. We will come together to heal as a family.”

Sundar Pichai, Google’s CEO, sent a letter to employees worldwide saying the company would provide support to all employees in the coming days.