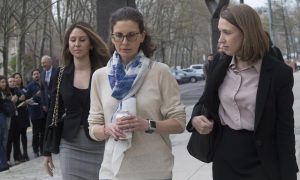 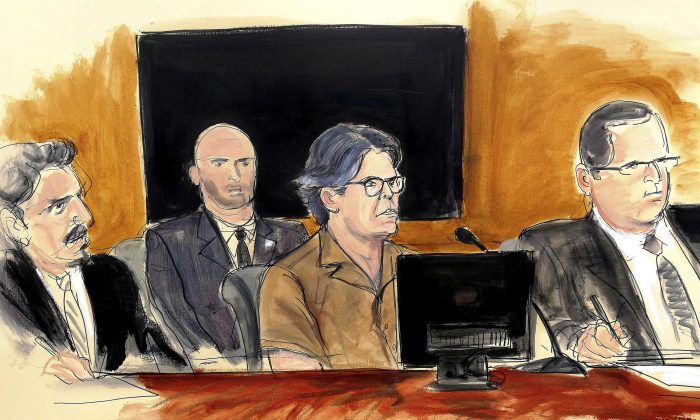 In this April 13, 2018, courtroom sketch, Keith Raniere, second from right, leader of the secretive group NXIVM, attends a hearing at court in the Brooklyn borough of New York. (Elizabeth Williams via AP, File)
NY News

Witness Recounts Being Forced Into Sex Act With NXIVM’s Leader

NEW YORK—An ex-member of the purported self-help organization NXIVM recounted how she was forced into a sexual encounter with the group’s leader, Keith Raniere, as she detailed the inner workings of a secret master-slave society within the group during an hours-long testimony.

The witness known as Sylvie, a British national identified by her first name only, continued describing her daily activities as a “slave” of the society—at some points getting visibly emotional—as day two of the ongoing trial took place inside the courtroom at the Eastern District of New York in Brooklyn.

Before her testimony resumed on May 8, District Judge Nicholas Garaufis denied the defense’s motion for a mistrial. Marc Agnifilo, Raniere’s lead attorney, argued that witnesses who have their last name withheld wrongly paint Raniere as guilty since they are presented as victims rather than witnesses. Agnifilo claimed it would force him to follow the prosecution’s line and argued it was “repugnant to my theory of the case.” Garaufis said it was to protect the witnesses’ identities from the public and the press.

Sylvie, who had been a member of NXIVM for 13 years, said she later was recruited by fellow member Monica Duran into a women’s only empowerment group that was actually a secret society dubbed DOS that prosecutors say was created in 2015. Duran said joining the secret society would help improve Sylvie’s life. In order to join, Sylvie testified that she needed to submit collateral.

Hoping to join what she thought was an innocent women’s group, Sylvie did not question the collateral requirements and wrote a fake letter to her family describing how she was a prostitute, with naked photos of herself attached to it. The letter, Duran said, would be put into a safe.

According to court documents, the secret society allegedly operated as a pyramid scheme, with levels of “slaves” headed by “masters.” Slaves were then expected to recruit their own slaves, thus becoming masters themselves. Many of the DOS members were branded with a cauterizing pen during a process that took “20 to 30 minutes.” Sylvie said that before she could be branded, the group had started to dissolve, after the media began reporting on it.

Sylvie also explained how Raniere’s teachings and classes, often given through the group’s president, Nancy Salzman, were very misogynistic and focused on the problems of women. She said she still struggles to overcome feelings of inadequacy.

“It just felt a different realm of darkness,” she testified, on the verge of tears. “All around that time, I felt shame—and still do. I just felt like everything was lies and secret and darkness. It was such a horrible time.”

Sylvie testified that she later got fed up of providing more and more additional collateral, and that tried to get Raniere’s permission to stop sending him photos. He informed her that she could stop with the nude photos, but “the next thing would be in person.” Sylvie recounted one incident in which Duran, who was her master, told her to meet with Raniere at an upstate New York house.

“I needed to ask him to take my picture and … I had to go along with whatever else happened next,” Sylvie told jurors. “I followed Keith into the house. From what I remember, he took me straight upstairs.”

She said Raniere showed her his study and later another room that had a big bed with “white, dirty sheets on it.” Raniere then told her to get undressed and lie on the bed. He then performed a sex act on her and took photos of her naked, mostly focused on her private parts.

After the forced encounter, Raniere “told me he was my grandmaster now and that he was a master of Monica,” Sylvie said. Raniere told her she was “special” and “brave,” and said that if she ever needed anything, she could ask him for help as she was now “part of the inner circle.”

The government’s prosecutor, Moira Penza, then asked Sylvie during the cross-examination why she did not reject Raniere’s advances.

“I understood that was the command of my master and that was what I was supposed to do as her slave,” Sylvie replied. Throughout her testimony, she explained that she followed every order of her master and Raniere in order to stay out of “trouble.”

As part of her assignments and instructions, Sylvie said she had to perform everyday errands for Duran and had to restrict herself to 800 calories per day. She said at one point she weighed only 89 pounds.

Frank Parlato, the group’s ex-publicist and whistleblower, told The Epoch Times in an interview on May 8: “We continue to see the depths of depravity that was NXIVM and DOS. We see women like Sylvie, who was cross-examined today, talking about being a slave just as naturally as someone would talk about being a lumberjack or an accountant.”