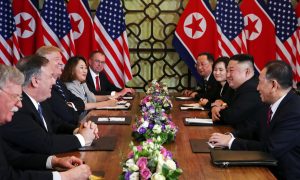 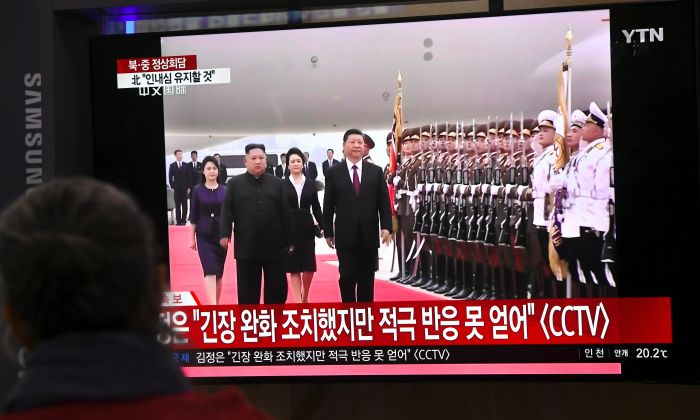 With Xi Visit to North Korea, Communist Regimes Assist Each Other in Negotiations With US

Chinese leader Xi Jinping arrived in Pyongyang for his state visit on June 20 to much fanfare, including a 21-gun salute at the airport and tens of thousands of North Koreans lined up along the roads to welcome him.

The visit marks the first time in 14 years that a Chinese leader has landed in North Korea. This also makes Xi only the second head of state to visit, aside from South Korean President Moon Jae-in, who came in September 2018.

In fact, the trip was arranged hurriedly, with the Chinese regime only making a public announcement on June 17. Why was the Chinese side in such a rush to convene this meeting?

The timing coincides with Xi and U.S. President Donald Trump’s upcoming meeting at the G20 summit in Japan, where they are poised to restart trade negotiations. It was the first positive sign that the trade dispute might have hopes of a resolution, after tensions escalated in early May when Trump imposed a tariff hike on Chinese imports. The U.S. administration accused the Chinese side of reneging on prior commitments made over months of talks.

Meanwhile, North Korea is at a similar impasse with the United States after a failed summit in Vietnam back in February. Trump said at the time that Kim insisted on the United States lifting economic sanctions, without offering enough commitments to denuclearization in return.

Thus, both sides had issues they needed to resolve with Washington.

The two states thus sought to convey a strong relationship.

According to China’s state-run broadcaster CCTV, Xi told Kim on June 20: “The essential feature of the China-North Korea relationship is adhering to a socialist state that is under the leadership of the Communist Party.”

Xi promised to cooperate with North Korea and other related parties to realize the denuclearization of the Korean Peninsula.

Kim also hinted at displeasure with Washington: “In the past year or so, North Korea has taken many positive measures to avoid escalation of the situation, and have managed and controlled the peninsular situation. But we haven’t received an active response from relevant parties,” according to CCTV.

Notably, North Korea’s state news agency did not report on such details.

In the article, Xi praised North Korea for moving in the “right direction” by politically resolving issues on the Korean Peninsula. Xi wrote that China would like to draw a grand plan with North Korea to realize permanent peace there.

Xi will stay in North Korea until June 21. He promised more economic partnership on June 20: “[North Korea and China] will expand cooperation in education, health, sports, media, youth, and rural areas,” according to CCTV.

North Korea’s economy depends on trade with China; it is the hermit kingdom’s biggest trading partner.

Meanwhile, the Chinese regime has historically relied on the issue of denuclearization as a bargaining chip with the United States.

Xi and Kim have previously met four times; each of those meetings happened before or after a Trump-Kim meeting.

In March 2018, after Trump agreed to meet with Kim in May, Kim traveled to Beijing and met with Xi for two days. This was the first time Kim met Xi in person.

Roughly two months later in May, Kim traveled to Dalian, a northeastern Chinese city, to meet with Xi. This trip occurred before the first Trump-Kim summit in Singapore.

And in June, Kim visited China again after the Singapore meeting. Some media reported that Kim had sought Xi’s help to end U.S. sanctions upon the summit’s conclusion.

In January 2019, Kim and his wife Ri Sol-ju visited Beijing, not long before the second Trump-Kim summit in Vietnam.

China commentator Zhou Xiaohui wrote in the Chinese-language Epoch Times on June 20 that Xi is likely to discuss with Kim about a denuclearization plan, which can be used as a bargaining chip at the G20 summit to negotiate for U.S. concessions in the trade dispute, such as current sanctions on Chinese tech giant Huawei.

Other observers have made similar predictions.

“Xi, like everyone else in Asia, is trying to reposition himself in light of a very unpredictable American president,” Jonathan D. Pollack, an expert on China and North Korea at the Brookings Institution, told the New York Times.

“If Xi can’t say something to Trump on trade, it would suggest that his visit to Pyongyang was for naught.”

Jenny Town, managing editor of U.S.-based analysis site 38 North, told BBC that Xi’s visit might have some “symbolic value” just before the G20 summit, adding that it was “more of a bonus than a deciding factor.”

But the Chinese regime has tried to deny such readings. “For the question whether President Xi uses the state visit to North Korea as a kind of ‘chip’ [for the meeting with Trump], I can only say you are overthinking.” Lu Kang, Chinese Ministry of Foreign Affairs spokesperson, said at a June 18 press conference.