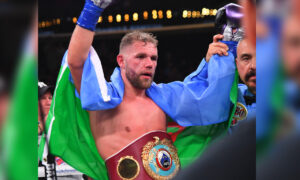 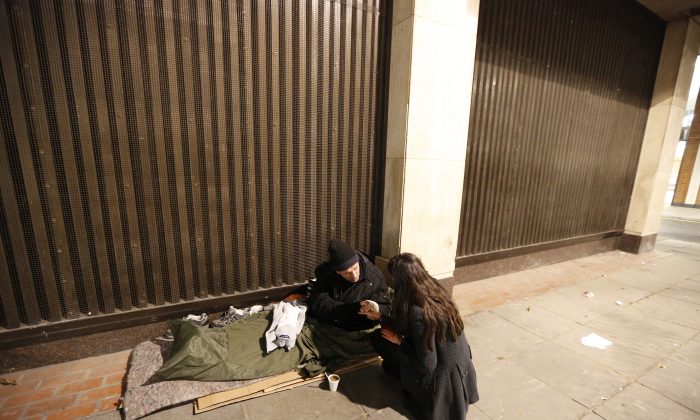 A homeless man grasps the hand of a volunteer who was handing out donated clothing, in central London on Dec. 13, 2012. (Reuters/Chris Helgren)
UK

With the Click of a Button, Britain’s Homeless Crowdfund Their Way to Work

LONDON—When Hana fled to Britain with her son from East Africa, she was grateful to have found safety from persecution and a roof over her head in her sister’s tiny London apartment.

It should have been a stop-gap, but a year on, the four still live together in cramped conditions, with Hana sharing a bed with her young son, and her sister doing the same with her toddler.

“When I came to Britain, I struggled with everything. It’s very hard to be a single mum and homeless,” said Hana, who did not share her full name for fear of repercussions.

With no job prospects, she had no chance of finding her own home in London, where rents are among the highest in the world.

Homelessness has been rising in England for nearly a decade, with over 82,000 families in temporary accommodation, including more than 123,000 children, government data shows.

But 32-year-old Hana is hoping to buck that trend, after a crowdfunding campaign by social enterprise Beam paid for her to study beauty therapy.

“It’s been a dramatic change, now I will be a professional beauty therapist. Straight away I want to start a job, the day I finish my studies,” Hana said in a phone interview.

She is one of about 50 homeless people who secured employment training through Beam, which it says is the world’s first purpose-built platform that helps homeless people crowdfund donations through their online profile.

The participants, who are referred to Beam by homelessness charities, are also supported by caseworkers throughout their studies and job hunt.

“We really want to return people to a stage of independence. They should never be defined by their homelessness,” said Beam founder Alex Stephany, who launched the platform last year.

He said each crowdfunding campaign is fully funded before a new one is launched to ensure each person has the chance to take a training course of their choice, be it accounting, dental nursing, or carpentry.

Homelessness charity Shelter, which partners with Beam, blames rising private rents, a freeze on benefits, and a shortage of social housing for the sharp increase in homelessness.

“We see destitution everyday and desperation from people. People who are being priced out of the rental market. We’re calling it a housing emergency, it’s atrocious,” said Alison Mohammed, Shelter’s director of services.

Discrimination against homeless people has also made it difficult for them to secure rental properties, she said.

A hotel in the northern English city of Hull was criticized recently after it canceled paid bookings made by a local charity to give rough sleepers a bed for Christmas Eve and Christmas Day.

Mohammed said initiatives like Beam can harness the public’s goodwill to help homeless people, but it is just “one piece of the puzzle.”

“Anything that can tap into the public’s wish to do something about homelessness is a good idea,” she said in a phone interview.

“It’s not going to solve the lack of social housing, but it is going to help people who have got to a position in their life where they can take that step,” Mohammed said.

Beam said a dozen people had so far gained employment and the group hopes to expand beyond London and roll out the initiative across the country.

For Hana, who will finish her beauty therapy studies next year, knowing that hundreds of strangers care about her wellbeing and future in Britain has been a source of comfort.

She is confident she will find her own place to live too.

“I don’t know these people and I don’t even see their faces, but they encourage me very much. It’s like a message from heaven,” she said.