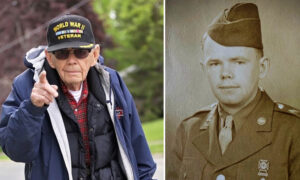 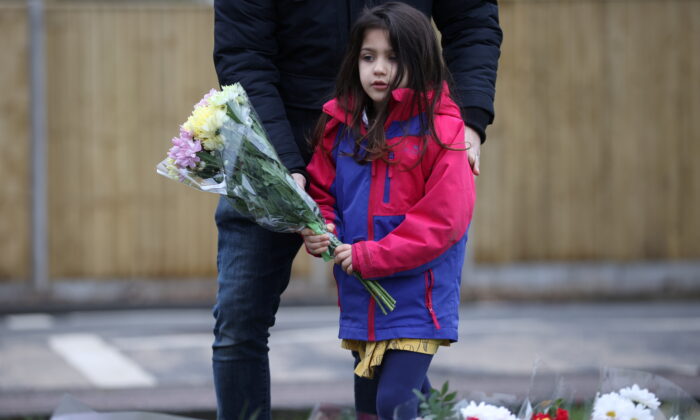 A girl lays flowers near the residence of Captain Sir Tom Moore, after his family announced that the centenarian fundraiser died, in Marston Moretaine near Milton Keynes, Britain, on Feb. 3, 2021. (Hannah McKay/Reuters)
UK

MARSTON MORETAINE, England—With flowers and lights, Britain paid tribute on Wednesday to Captain Tom Moore, 100, who touched the hearts of millions by offering a simple message of hope and self-sacrifice during the COVID-19 lockdown.

Moore, who raised tens of millions of pounds for the National Health Service (NHS) by walking up and down his garden, leaning on a frame, died on Tuesday in Bedford Hospital after suffering pneumonia and COVID-19. He had been fighting cancer for five years.

Outside his home in Marston Moretaine, 50 miles (80 km) north of London, children laid flowers. One message read: “Rest in Peace Captain Tom. We love you. X.”

“You will always be our hero,” read another message. “Thank you for your warmth and your wonderful smile. Rest in Peace.”

His picture was shown on Piccadilly Circus in central London while the London Eye, Wembley Stadium, and the Blackpool Tower shone lights of honour.

Condolences poured in from Queen Elizabeth II, Prime Minister Boris Johnson, and even the White House, while soccer players, school children, and his family shed tears for a man who millions consider a lockdown hero.

Amid the death and gloom of the COVID-19 pandemic, war veteran Moore’s wit and inspiration struck a chord with millions.

“For all those people who are finding it difficult at the moment: the sun will shine on you again and the clouds will go away,” said Moore, dressed in a blazer and tie and displaying his war medals, after completing his walk in April.

When asked about speculation he would be knighted by the queen, he quipped that he would find it funny to be known as “Sir Thomas Moore”—a reference to the Tudor statesman.

He was knighted by Queen Elizabeth at a ceremony at Windsor Castle.

While Moore exuded modesty, his fame was global: CNN ran a banner headline about his death during the news, Russia news broadcasts reported that “Tom Moore died like a real soldier,” and his death was reported across Asia.

The United Kingdom has the world’s fifth worst official COVID-19 death toll—currently at 108,013—but Moore brought hope to many.

“Whilst he’d been in so many hearts for just a short time, he was an incredible father and grandfather, and he will stay alive in our hearts forever,” his daughters said.

Health Minister Matt Hancock told BBC television, “We should find a way to make sure that we mark the memory of Captain Tom and thank him for the contribution that he made for the NHS.

“He touched the heart of the nation, and we should remember that.”