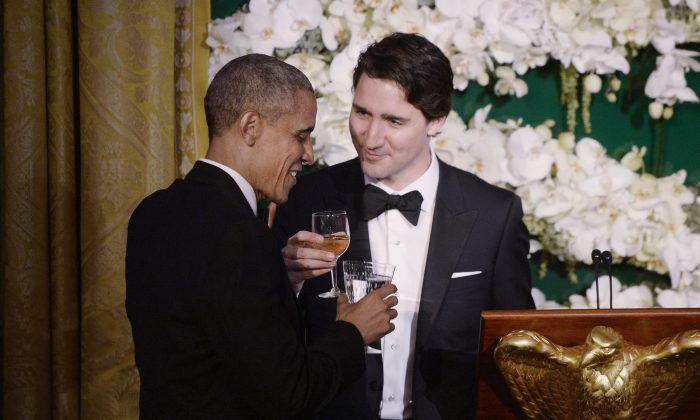 The two leaders announced a number of new agreements and policies.

Both committed to signing and implementing the Paris Agreement on climate change on April 22 and to creating long-term strategies for lowering greenhouse gases in accord with it. They will reduce methane emissions from the oil and gas sector by 40–45 percent by 2025, adopting an amendment to the Montréal Protocol to phase down hydrofluorocarbons, and reaching an agreement on a market-based mechanism to limit carbon emissions from international aviation.

The White House reaffirmed its priority: the controversial Trans-Pacific Partnership.

Trudeau announced that President Obama and Mexican President Enrique Peña Nieto have agreed to visit Canada in June for a North American “Three Amigos” summit. The hoped-for outcome is a “hemispheric” climate- or energy-environment pact.

The two announced a new partnership to confront challenges facing the Arctic, including ecosystem changes exacerbated by rising global temperatures. It emphasizes partnerships with Indigenous communities to develop a plan and timeline for renewable energy projects, science-based leadership to conserve biodiversity, and building “a sustainable Arctic economy.”

The two countries will partner on a new initiative to “strengthen regional participation in the G7 24/7 Network,” enabling national law enforcement agencies to “battle against high-tech crime.”

Canada will complete the final phase of a coordinated entry-exit information system and the United States will expand its pre-clearance operations to eight more sites across Canada, including the Billy Bishop Toronto City Airport, Québec City Jean Lesage International Airport, Montréal Rail, and the Rocky Mountaineer.

To reduce the ongoing problem of mistaken identities on no-fly lists and other border-related incidents, the two governments have agreed to create a “Canada–U.S. Redress Working Group.”

They committed to implementing the final phase of a system for sharing basic biographic information on travelers entering a country by land or air, thereby creating an exit record for the other country.

Affirming that “supporting Indigenous peoples’ social and economic aspirations” is a “priority for both countries,” the leaders pledged to share information on self-governance policy to improve service delivery for First Nations.

To reduce red tape at the border, American and Canadian officials, business representatives, and consumer groups will increase efforts to synchronize safety requirements for everything from trains carrying crude oil to motor vehicles to pharmaceuticals and cosmetics.

The two neighbors still face one of the longest-running trade disputes on earth; the billion-dollar argument over Canadian softwood lumber has seen Americans and Canadians at loggerheads for 30 years. A new long-term agreement was not announced. Instead, the White House reaffirmed its priority: the controversial Trans-Pacific Partnership (TPP), despite more than 20 million U.S. manufacturing jobs being lost over the past 25 years.

The two neighbors still face one of the longest-running trade disputes on earth: the billion-dollar argument over Canadian softwood lumber.

Canada’s International Trade Minister Chrystia Freeland and her U.S. counterpart have been given 100 days to come up with a plan to head off the new softwood lumber dispute. “It will be fine,” assures Obama. “It’s a long-standing bilateral issue but it hardly defines the U.S.–Canada relationship. It’s being looked at by smart people and they’ll find a way to resolve it.”

The two governments agreed to continue working to counteract ISIS’s propaganda, cut off its funding, and curtail the flow of foreign terrorist fighters. They’ve committed to strengthening U.N. peace operations through reforming and modernizing operations in the face of increasingly complex conflicts.

Conservatives in Canada will assert that much of what was achieved last week builds on their existing work. True, but, as Obama noted, partisanship ends at the border, and a smooth working relationship is in Canada’s major interest.

Despite all the hype, the Trudeau visit did not receive top billing on all U.S. media, with some cable channels giving the visit only the same amount of attention as allotted to the annual presidential turkey pardoning.

John Kennedy’s famous aphorism in his 1961 address to the Canadian Parliament still rings true: “Geography has made us neighbors. History has made us friends.”

Despite naysayers, the bilateral relationship has clearly been strengthened by the visit. However, we can only wonder how much Prime Minister Justin Trudeau and President Barack Obama can accomplish with less than a year left in the latter’s presidency.

David Kilgour, a lawyer by profession, served in Canada’s House of Commons for almost 27 years. In Jean Chrétien’s Cabinet, he was secretary of state (Africa and Latin America) and secretary of state (Asia–Pacific). He is the author of several books and co-author with David Matas of “Bloody Harvest: The Killing of Falun Gong for Their Organs.”