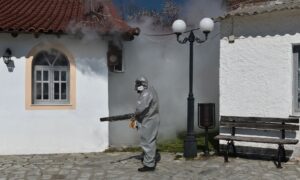 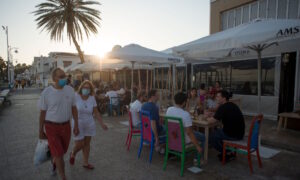 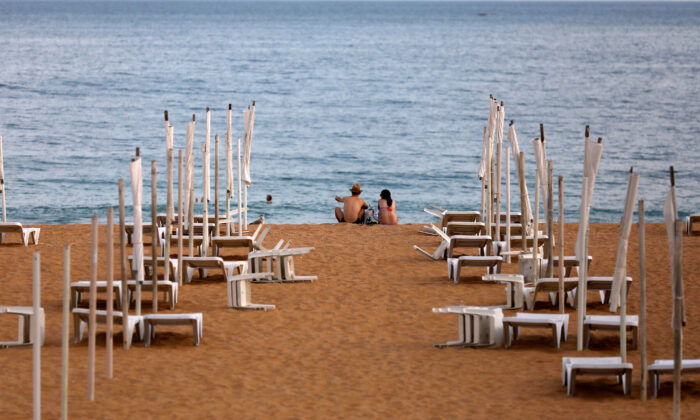 A couple is seen next to empty hammocks during the coronavirus disease (COVID-19) pandemic in downtown Albufeira, Portugal, on July 20, 2020. (Rafael Marchante/Reuters）
Europe

With No Brits, Cash-Strapped Algarve Fights for Survival

VILAMOURA, Portugal—In his near-empty pub in the Algarve in southern Portugal, Samuel Tilley is fuming that coronavirus regulations in his home country Britain are keeping tourists away, further jeopardizing an already gloomy summer season.

Usually packed with tourists at this time of the year, Vilamoura is quiet, leaving bar staff at Tilley’s O’Neills pub without much to do but brood over Britain’s decision to leave Portugal off a list of more than 50 countries safe enough for travel without restrictions.

“It was very shocking. I don’t believe there’s any logic behind it,” Tilley said, while keeping an eye out for the rare thirsty customer walking in to have a refreshing pint by the harbour.

“There are some wonderful people here in the Algarve and beyond and I feel this decision by the British government really hurt them.”

Portugal initially won praise for its quick response to the pandemic but a persistent count of several hundred new cases per day concentrated in and around Lisbon in the past two months has worried authorities at home and abroad, leading Britain and other European nations to impose restrictions on travel from the southern European nation.

Last year, Portugal welcomed about 2 million Britons, with 64 percent of them heading to the sunny Algarve, famed for its sandy beaches and golf courses. So far in 2020, only 92,000 Britons have made it to the region.

Sunbeds are left empty and lonely waiters stand outside restaurants with menus in hand but no holidaymakers to speak to.

“It used to be so busy that you would stand shoulder to shoulder,” Welsh tourist Nadine said as she walked around nearly empty streets in nearby Albufeira.

Eliseu Correia, head of the Algarve-based destination management company EC Travel, said not being included in the British safe travel list had been devastating for his business, with revenues dropping around 60 percent this year compared to 2019.

“It is obviously a tremendous hit on everybody,” he said. “We had no revenue in March, April, May, June…so we were counting on that.”

Britons pumped around 3.2 billion euros into Portugual’s economy last year and without that cash, the Algarve’s businesses, which mainly rely on the busy summer months to make ends meet, will find themselves in a tight spot.

The travel list, which allows holidaymakers to dodge a 14-day quarantine upon returning home, is expected to be reviewed by next Monday but, even if Portugal is put on the list then, it might be too late.

“It is obvious part of the damage can’t be reversed,” said Eliderico Viegas, President of Algarve’s AHETA hotel association. “Many people have already opted for other destinations.”

On average, the Algarve’s hotels, which are usually fully booked in July and August, are currently surviving with only 40 percent occupancy, according to AHETA.

The Algarve saw its number of registered unemployed in June rise 231 percent compared to the same period last year, increasing from around 8,000 to more than 26,000 people.

Most relied on the so-called seasonal jobs, which were wiped out as demand collapsed and businesses closed doors.

The government has acknowledged the Algarve needs urgent help, and announced on Tuesday it would spend 300 million euros to support its struggling economy.

Francisco Melo, who runs boat tours along the coast, says his business is making 20 percent less compared to 2019.

But there is a silver lining to how quiet things are, which he hopes will in turn help bring tourists back:

“Things are hard but the sea is full of life, with dolphins, tuna, horse mackerel. We have never seen the sea like this.”