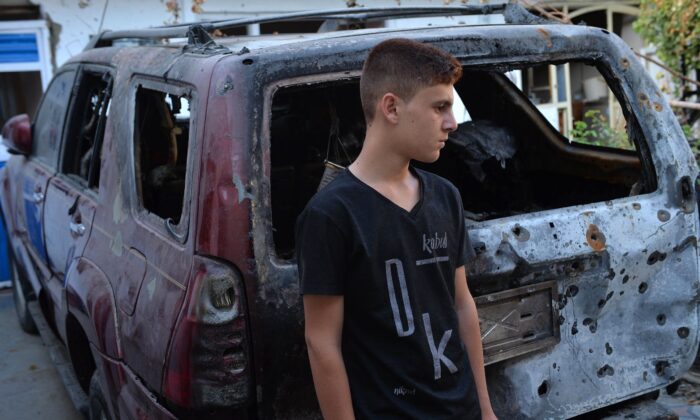 A relative of Ezmarai Ahmadi stands next to a vehicle that was damaged on Aug. 29 in a U.S. drone strike that killed Ahmadi, seven children and two other adults in the Kwaja Burga neighborhood of Kabul, Afghanistan, on Sept. 18, 2021. (Hoshang Hashimi /AFP via Getty Images)
Viewpoints

With No Accountability for Disasters, Public Trust Threatens to Buckle

The idea of a straw that broke the camel’s back is proverbial.

Some sources trace the notion to Thomas Hobbes (1588–1679), for whom the burden is feathers and the beast a horse, but I suspect that the basic idea is much older.

What is the basic idea? That an accumulation of evils is bearable up to a certain point, beyond which even a tiny addition, innocuous by itself, brings disaster.

The image of a camel, struggling under a heavy load but then collapsing when another piece of straw is added to its burden, is vivid and speaks to our intuition about how the business of life often proceeds.

On Sept. 17, we learned the truth of what had been rumored all along: that the drone strike aimed at ISIS-K elements in Afghanistan at the end of August killed zero terrorists but blew to bits 10 civilians, including seven children.

Oops. A week or so back, before the Pentagon admitted the truth of what happened, Sen. Rand Paul (R-Ky.) asked Secretary of State Antony Blinken whether the drone strike obliterated a terrorist or an aid worker.

Oh, we aren’t sure, Blinken replied.

“You’d think you’d kind of know before you off someone with a predator drone,” Paul said.

Yes, you would, wouldn’t you?

Nah. Three days after the incident, Gen. Mark Milley, chairman of the Joint Chiefs of Staff, said that the attack was a “righteous strike.”

He has subsequently revised that to a “heart-wrenching,” “horrible tragedy of war,” but how can you tell? Who will be held to account for the murder of those 10 civilians?

What a quaint idea.

How about taking responsibility for the disaster that was the evacuation of Afghanistan? President Joe Biden called that deadly fiasco an “extraordinary success,” which was about as convincing as Dorothy Parker’s declaration that she was Marie of Romania.

At least since Hillary Clinton angrily brushed off the murder of four Americans, including a U.S. ambassador, in Benghazi with the question, “What difference at this point does it make?” accountability has been off the menu when it comes to the top echelon of our political class.

Take a few steps down and, pow, lying, leaking, exceeding orders, making a misjudgment: all can get you cashiered, and maybe incarcerated, almost instantly.

But once you’re in the protected circle near the top, you are all but invulnerable.

Milley can actually circumvent the chain of command and tell his top aides that he, and not the president of the United States, is in charge of America’s nuclear arsenal. No strike, he told them, is to be authorized without his say so.

Milley can also secretly call his counterpart in the Chinese military, twice, to assure him that the United States has no plans to attack China and if such a plan were forthcoming. he would be sure to give him the heads-up.

Milley’s behavior has been the subject of many news stories.

Some on the left paint him as a hero who saved the country from the possible depredations of President Donald Trump. On the right, Milley has been subjected to harsh criticism. I have elsewhere done him the courtesy of writing his letter of resignation for him, though, to date, he has forborne to thank me for saving him time.

But I don’t think that it is widely appreciated how serious Milley’s actions were.

He didn’t approve of the president he served. Therefore, he circumvented the chain of command and pretended that the U.S. military answered to him.

In my view, Milley shouldn’t simply be fired. He should be court-martialed for something akin to treason.

At the very least, what he did was tantamount to the early stages of a coup or, to use a word the left likes, an “insurrection.”

I know it will never happen and I’m not holding my breath.

Possibly Milley will resign or quietly be pushed out, thence to pursue lucrative book deals and spots alongside James Clapper, John Brennan, and other anti-Trumpers on the talk show circuit.

In the aftermath of the revelations about his behavior, Biden said that he had “great confidence” in Milley. Normally, such declarations are a prelude to dismissal, but with Biden, how can you tell?

The president is well into debilitating senescence and one is typically hard-pressed to know what he will do or say.

Meanwhile, the French, for the first time in our long association, have recalled their ambassador to Washington because of a submarine deal we secretly concluded with the Australians.

A panel for the Food and Drug Administration rejected Biden’s call for widespread vaccine booster shots, even as his effort to promulgate a nationwide vaccine mandate was facing multiple challenges, legal and popular.

This past weekend, an anemic protest against the treatment of those arrested in the aftermath of the Jan. 6 brouhaha at the Capitol was met by a squad of journalists and what seemed like a battalion of Capitol Hill police in full riot gear. They looked ridiculous, like something off the stage set of a Star Wars knock-off or, maybe, a fever dream of Roderick Spode imagining his Black Shorts in the future.

Inflation is at a 30-year high, the FBI, besieged by scandal, has lost the confidence of the public, and John Durham’s glacial investigation of malfeasance in the Russia collusion delusion is finally beginning to bear fruit with the indictment of a Perkins Coie lawyer who allegedly covertly worked for the Clinton campaign and lied about it to the FBI.

Who knows what squamous, scurrying creatures those overturned rocks will reveal?

Did I mention that hordes of illegal immigrants continue to pour over our southern border (without masks! without vaccines!)? The Biden administration, like a 1-year-old, seems to think that if it covers its eyes, the problem will vanish.

Nevertheless, drone footage (initially outlawed by the FAA until public outcry made them rescind the prohibition) shows thousands of migrants huddled under a bridge in Del Rio, Texas.

It wasn’t a good week for the Biden administration, but amid a tsunami of crises, scandals, contretemps, and disasters, the president left it all behind to vacation in Delaware.

Just a week or so back, Biden went before television cameras to say that his “patience was wearing thin” with those who chose not to receive the vaccination for the CCP virus.

I suspect that patience is wearing thin all around as stalk after stalk of straw is added to the back of public trust.

Confidence in the regime, swaying under the ever-increasing burden of this malevolent incompetence, is beginning to buckle.

To alter the metaphor, the United States is approaching crush depth.

If and when that happens, the results won’t be pretty.