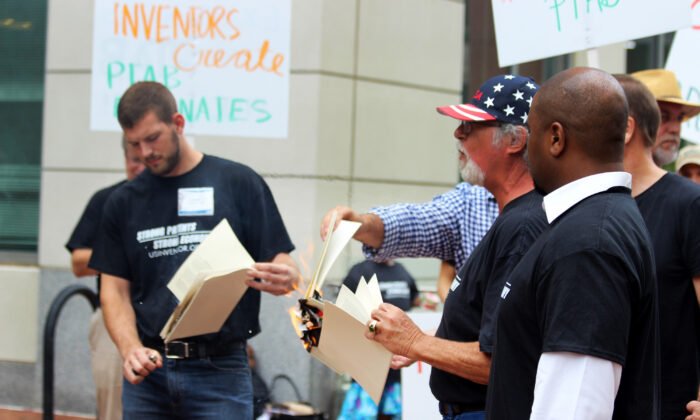 Inventors burn patents in protest outside the Patent Trial and Appeal Board on Aug. 11, 2017. (Courtesy of US Inventor)
Tech

With Millions at Stake, Inventors Fight US Patent System

The U.S. patent law system once rewarded inventors for the telephone, the lightbulb, and the airplane. But some inventors now say that the same system has turned against them.

According to them, the trouble started with the 2011 America Invents Act (AIA). Under that law, it’s cheaper to file lawsuits in a patent court to declare an inventor’s patent to be invalid than it is to pay the inventor for using their work. If an inventor creates a valuable new product or technology, this law incentivizes companies to steal their idea and bring a lawsuit to the patent office to overturn the patent.

“What it has become is a tool for large businesses to invalidate the patents of smaller companies in order to utilize their inventions without paying them for it,” Emmy Award-winning inventor Glenn Sanders said.

For inventors who often spend years and tens of thousands of dollars getting a patent, the consequences of this act have been devastating, according to inventor David Furry.

Furry knows the patent industry from the inside. He created a camera designed to detect tiny, low-temperature gas leaks.

“We got a very, very tough examiner,” Furry said. “It’s kind of luck of the draw.”

But inventors have good reason to endure the patenting process. Patents give inventors a legal monopoly on their invention for a limited time. During that time, no one can make their invention without paying them. If the invention is useful, a patent can make an inventor millions of dollars.

Gas leak detection is a multi-million-dollar industry, and no visual device on the market was able to detect the small gas leaks that Furry’s camera could. He was poised to reap the rewards of his work. Exxon Mobile used his camera to find leaks at gas facilities worldwide.

Then FLIR, a company that Furry had previously worked with, started producing his camera without paying him for it. When Furry sued them for patent infringement, FLIR responded by taking the case to the Patent Trial and Appeal Board (PTAB), arguing that the camera wasn’t a breakthrough and didn’t deserve a patent.

The PTAB was created through the AIA. It evaluates patents and decides whether there were good reasons to grant them. Among inventors, the PTAB has a nickname—“the patent-killer.” In about 84 percent of cases, the PTAB decides to invalidate patents. In comparison, civil court cases go in favor of the person suing only 56 percent of the time.

The appeal board disputes these figures. Its own statistics show a win rate for inventors of about 59 percent.

But the truth is very different, according to US Inventor’s fellow Josh Malone.

PTAB counts lawsuit wins and losses, but US Inventor counts actual patents lost, according to Malone. If an inventor gets his patent challenged three times and loses on the third, it doesn’t matter if he won the first two challenges.

US Inventor also counts settlements as patent owner losses, because patent owners lose the right to their cut of the profits.

Inventors sometimes face a relentless barrage of lawsuits, according to Paul Morenville, the founder of US Inventor. In one instance, a company called Zond owned 10 patents, but faced 120 different petitions for patent invalidation, according to Morenville. It eventually lost all of them to this legal bombardment.

It’s cheaper to use the PTAB to invalidate a patent than to pay an inventor for patent infringement, according to patent attorney James Yang.

Also, patent owners can’t file counterclaims of infringement to the PTAB and find themselves only able to play defense.

When Furry’s case went to patent court, his patent was invalidated for a shocking reason. The court said his patent idea wasn’t original because there was already a camera designed to detect jet engine exhaust that often reaches thousands of degrees.

“They compared leaks that I’m finding with probably half the gas that comes out of a cigarette lighter to the gas coming off of the F-15 jet engine. They said it’s the same thing,” he said.

As FLIR continued to violate his patent, Furry watched his own sales decline. Furry said that losing his patent probably lost him $48 million.

“It hurts, but I’m not going to dwell on any of that,” Furry said. “If the Lord had intended that to happen, it would have happened.”

Many inventors have stories similar to Furry’s situation.

Sanders invented a small microphone that both recorded and transmitted audio at the same time. For actors and movie producers, the device was a welcome solution to faulty wireless connections. For his work, Sanders’s company Zaxcom received an engineering Emmy Award for innovations in wireless technology.

“We have what is effectively the Nobel Prize of the industry, which is an ‘Academy Award,’” Sanders said.

But a competitor, Lectrosonics, used the technology in violation of Sanders’s patent. When Zaxcom sued in response, Lectrosonics asked PTAB to overturn Sanders’s patent. PTAB ignored the rewards Zaxcom had received for innovation and ended the patent, according to Sanders. It compared his device to a previous invention—a large backpack that performed a similar function, but was too big for an actor to use.

“We were given a patent that basically said that the patent is only valid if the transmitter is easily concealed, hidden, and to the point where an actor could use it,” he said.

Making a transmitter as small as a cigarette box required new technology, according to Sanders.

“It was a lot of electronics, a lot of software, a lot of miniaturization,” he said. “There’s a whole host of things that had to be worked out to make this work. It’s a big deal.”

Another inventor, Rod Pinkston, created a new feral hog trap that uses cameras and cellphone activation to help trappers catch an entire herd of hogs at once. A third inventor, Roy Smith, created a new type of children’s shoes with lights that shine underneath their fabric, not under hard plastic.

According to Malone, Google, Microsoft, Apple, and other Big Tech companies often infringe patents, then use PTAB to avoid paying for intellectual property theft. Apple alone has about 700 patent challenges to its name.

“They get good rates from their attorneys because they do such volume,” Malone said. “So for probably $100,000, you can take out a patent that may be worth tens of millions of dollars.”

The Big Tech companies that kill the most patents have many former employees within PTAB, according to Malone. He also noted that Big Tech attorneys often become PTAB judges, then decide in favor of their former employers.

“Their attorneys have applied to work at PTAB and then become high ranking judges and set policy,” he said. “One of them ruled in favor of Apple in 23 out of 24 cases. And then they go back and work for Apple for huge salaries and bonuses.”

Currently, the Biden administration has nominated attorney Kathi Vidal as PTAB director. Vidal has worked for Apple, Microsoft, and other companies that have filed a total of 2,381 PTAB cases to revoke patents.

In one case, the U.S. Patent Office (USPTO) told federal Judge Gary Taranto that it picks administrative patent judges with the intent of ensuring the ruling desired by the patent office’s director.

“The director is trying to ensure that her policy position is being enforced by the panels,” a USPTO official told the judge.

However, federal circuit courts have rejected claims of PTAB bias.

In response to these criticisms, a PTAB spokesman said the bonus structure mentioned in this study no longer exists and that administrative patent judges have never received bonuses based on decision outcomes.

“Our administrative patent judges are technical subject matter experts in various areas of patent law who work tirelessly to uphold the America Invents Act standards set forth by Congress and serve our world-class innovation system,” he said.

But inventors don’t seem to trust that their patents will be upheld anymore.

Furry, who held a patent worth millions of dollars before PTAB invalidated it, said he now advises inventors to spend money on advertising instead of patents.

“What I would do is try to keep as many of the secrets to myself as I could and try to make as much money as I could with it before a competitor started showing up,” he said. “It’s not worth it at all.”

Correction: A previous version of this article contained a photo caption that misidentified the person posing in the photo with Glenn Sanders. The Epoch Times regrets the error.