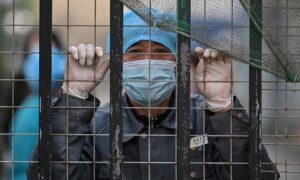 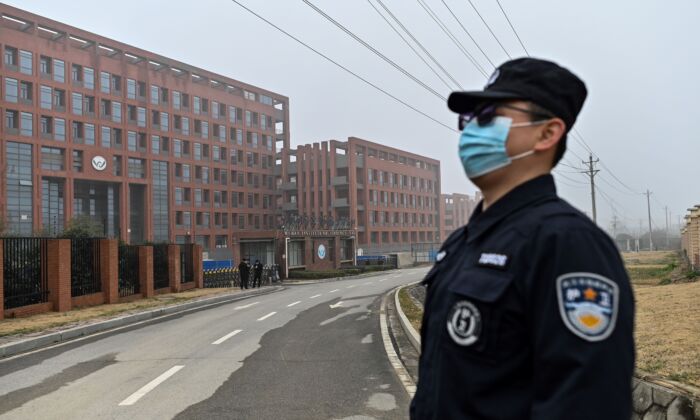 A security man stands guard as members of the World Health Organization (WHO) team investigating the origins of COVID-19 make a visit to the Wuhan Institute of Virology in Wuhan, in China's central Hubei Province, on Feb. 3, 2021. (HECTOR RETAMAL/AFP via Getty Images)
INSIDE CHINA

As Chinese New Year approaches, Chinese authorities are tightening restrictions in an attempt to curb the spread of the CCP (Chinese Communist Party) virus.

In the northeastern city of Changchun, sources said that local authorities were underreporting the outbreak.

On Feb. 4, the Party secretary of the First Hospital of Jilin University in Changchun, Lü Guoyue, announced to the public that the facility sent out 314 medical staff to take over the Changchun Infectious Disease Hospital, a hospital designated to treat COVID-19 patients since Jan. 25.

Chinese-language Epoch Times’ columnist and China affairs commentator Zhou Xiaohui said sources in Changchun told him that the Changchun infectious disease hospital had its staff replaced because they had to be quarantined following several positive COVID-19 diagnoses among them.

Jilin Province, where Changchun is the capital, announced new infections on Feb. 7, but hasn’t announced any cluster outbreak within the Changchun Infectious Disease Hospital.

In recent days, Chinese city governments launched more restrictions to discourage people from traveling for the Lunar New Year holiday. These include regions that did not announce any infections recently.

The government also banned pharmacies from selling medicines that are used to treat a cold or fever.

“Any resident who has a fever must visit the township government-run hospitals, the county’s people’s hospital, or the county’s Chinese medicine hospital,” the government announced. This is a measure to ensure that authorities capture all the people who could potentially be exhibiting COVID-19 symptoms.

Hailun city in Heilongjiang Province announced on Feb. 2 that nobody would be allowed to leave their homes, except those who need to visit the hospital for treatment and those who are required to take COVID-19 tests.

Beilin district in Suihua city, also in Heilongjiang, announced on Feb. 3 that only emergency vehicles, medical staff, police, and government staff who have a pass, were allowed on the roads. Others would be detained and punished. But the city did not specify what kind of punishment.

Some citizens complained that they were forced under lockdown with no prior notice, giving them no time to buy basic necessities.

Harbin city resident Wang Yue (pseudonym) told the Chinese-language Epoch Times in a phone interview that he was taken to a quarantine center because an employee at the gas station he visited before was diagnosed with COVID-19. Authorities therefore believe he was potentially infected.

“They sent me to the Dadingzishan Hotel on Feb. 1 for quarantine,” Wang explained. Initially, authorities said he could leave on Feb. 4. But he was told government staff must escort him back to his home.

“I called the community office several times and they refused to pick me up and said they were busy. I then called the CDC, nobody answered the phone,” Wang continued. Two days later, he was finally taken home.

Another Harbin resident said that she planned to go shopping but suddenly found her apartment door was sealed from the outside on Feb. 3. “They hadn’t notified us at all,” the resident complained.

Meanwhile, Zhou Liang works in Harbin but his family lives in Suihua.

Zhou told the Chinese-language Epoch Times that he planned to go home on Jan. 22, and he checked with both Suihua and Harbin government officials and was told that he could go home directly if he shows a negative COVID-19 nucleic acid test result taken within the past 72 hours.

However, Zhou was immediately taken to a quarantine center after he got off the train in Suihua. After a 14-day quarantine, Zhou was told that he had to be self-quarantined at home for another 14 days.

Government staff sealed off his home immediately after sending him home.

“All five members of my family are locked at home,” Zhou said. “We didn’t prepare any food!”

Zhou said a man who came back to Suihua on the same train as him had to quarantine for 14 days before taking the train, then had to be quarantined for another 28 days in Suihua.

“There’s no policy mentioning these quarantine rules. I can’t understand why they did this to us,” Zhou said.