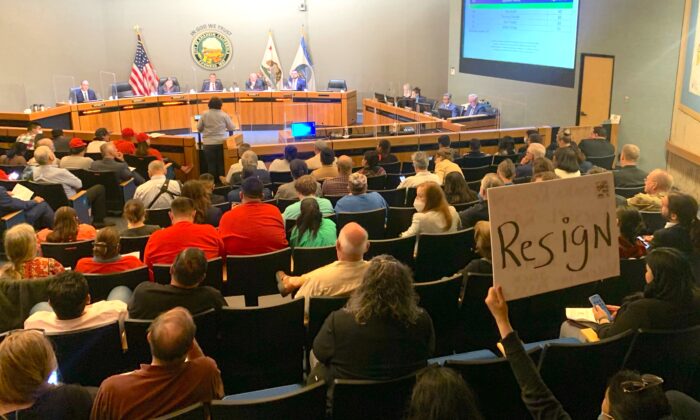 Members of the public partake in public comment during an Anaheim City Council meeting in Anaheim, Calif., on May 24, 2022. (John Fredricks/The Epoch Times)
Orange County Community

The city of Anaheim, Calif., has been reacting to an FBI investigation, resulting in the resignation of its mayor, and having its residents questioning what has allowed the mismanagement of this premier city.

Anaheim, home to Disneyland, the Convention Center, and the Angels and Ducks, has taken a devastating blow from Gov. Newsom’s coronavirus lockdown. To stay afloat, it has recently borrowed some $216 million and now finds itself in 33rd place out of 34 Orange County cities, based on the per capita of its unrestricted net position.

By reviewing a city’s required annual financial audit, usually available online in its Annual Comprehensive Financial Report, one can take the unrestricted net position for governmental activities from the basic financial statements and divide this number by the city’s population. This provides a simple metric to gauge the temperature of a municipality. It also provides an overall range, top to bottom, to compare cities in the state or region. Anaheim’s poor showing of a negative $2,022 per capita should be cause for concern for its residents.

When cities find themselves in dire financial straits, thanks mostly to approving generous defined benefit pension plan and retiree medical benefits to its bargaining units, they ask voters to raise the sales tax charged within its borders. Campaigns are mounted, and there are references to fixing potholes and maintaining proper public safety to garner support for such a ballot measure. Voters are rarely told the real reasons for the fiscal distress.

Pursuing a countywide sales tax increase to address the County’s Chapter 9 bankruptcy protection filing in 1994 was the first, and basically the only, significant solution presented to the voters. It failed. Voters were in no mood to give more hard-earned tax dollars to a government that became an international embarrassment due to mismanagement.

What is Anaheim to do? The next obvious solution is to tax the tourists that attend its venues and impact its infrastructure. Councilman Jose Moreno recently proposed just that with a measure to establish a 2 percent gate tax for voters to possibly approve on the November ballot. It was quickly derailed.

The four usual table-top strategies for families addressing with personal debts and pursuing a debt-free home are to determine if revenues can be raised, expenses cut, debt refinanced with lower interest rates, and/or selling possessions for additional cash. Cities and counties are no different.

In Orange County’s case, it found a fifth and very infrequent strategy: suing those who brought them to the dance. I had the privilege of predicting this largest municipal bankruptcy filing for a municipality at that time in United States history. I also assisted in obtaining the largest total settlement in United States history, more than $800 million.

The city of Costa Mesa, using the metric, is in worse shape than Anaheim. It is in 34th place and also needs to develop a strategic financial plan to improve its fiscal situation. It has come up with a proposed solution that is somewhat out of the box. Since reducing debts and spending is difficult for a progressive city council, why not raise the population instead? That should improve the metric, right?

However, Costa Mesa’s city council majority just approved a ballot measure for November’s General Election that would modify Measure Y (pdf), a requirement for voter approval for certain new development, which was approved by the city’s voters in 2016, to allow for the construction of more housing. For a city that is just about fully built out, this will mean numerous high-density, multiple-floor apartment structures.

By allowing the building of up to 11,760 apartment units, an estimated 31,752 residents could be added to the city’s population. Setting aside the demands on the city’s water, sewer, and road infrastructure systems, will this really help Costa Mesa’s fiscal hole? Somewhat. But current residents will have to put up with even more traffic congestion at Harbor Boulevard and the 405 Freeway.

It would seem that improving the city’s dismal 61 percent funding ratios with its pension plans would be a more appropriate strategy, as Costa Mesa is also in last place in this category. Cities more or less break even cashflow-wise when it comes to new housing and the taxes it generates.

Why increase the city’s population by 28 percent for no material increase in revenues to address liabilities on the balance sheet?

Will the residents swallow massive apartment complexes or potential high rises north of the San Diego Freeway? Especially if it doesn’t improve the city’s deficit? And I’m sure Fountain Valley and Santa Ana residents will raise concerns about such major developments along its borders.

When a high-rise commercial building was proposed some 30 years ago at the corner of Harbor Boulevard and South Coast Drive, the residents in Costa Mesa went apoplectic. It resulted in the eventual construction of an IKEA.

When pursuing measures to deal with previous poor fiscal management, Anaheim just put the brakes on allowing its residents to vote in November on a tax increase impacting mostly its tourists and guests.

Costa Mesa voters will actually get to vote on a proposed density increase strategy ballot measure, one which will impact each of them personally in their daily driving routines but will not reduce its liabilities in any significant manner. Both cities still need to pursue the necessary table-top strategy discussions.