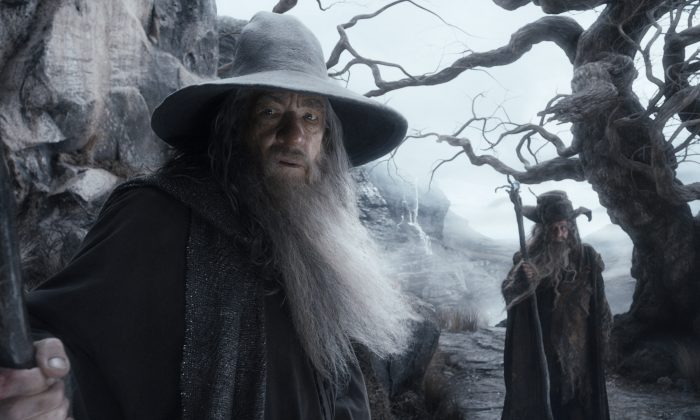 Hobbit: The Desolation of Smaug" was No. 1 at the weekend box office.
Entertainment

With Hobbit 2, Peter Jackson Back on Top of his Game

Tolkien-geeks of the world rejoice! I bear good tidings: “The Hobbit: The Desolation of Smaug,” rocks!

Let it be known that the reviewer is allowed to say “Tolkien-geek” because he is one. He read “The Hobbit” forty-something times. “Lord of the Rings”: fifty-two times, twice in German. Not bragging. Just stating credentials of card-carrying Tolkien geek-dom. He knows vehemently whereof he speaks. Should he be slightly embarrassed by this? More on that later.

In the first Hobbit installment, thirteen dwarves are on a journey to reclaim their kingdom that was usurped by the dragon, Smaug.

Under the guidance of the wizard Gandalf, they collar themselves an unwilling accomplice in the form of Bilbo Baggins, a hairy-footed wee hobbit in his declining years, who has no interest in adventure of any kind.

He’s supposed to burgle back from Smaug “The Arkenstone,” a stone with mighty powers upon which all the dwarves hopes are founded.

It’s a coming-of-age tale as well as a Hero’s Journey for Bilbo, and a road-trip movie for hobbit, dwarves, and wizard.

In the second installment, we meet up with them again, after they’ve escaped the halls of the Goblin King in the Misty Mountains, and Bilbo has escaped the nightmarish subterranean lake-dwelling creature Gollum, and stolen his magic ring that makes the wearer invisible.

Off They Go Again

In the opening of Hobbit 2, they’re beset by goblins and wolves, and escape by taking refuge in the house of Beorn, the last of the human shape-shifters—a massive man who’s sometimes a bear.

Then it’s off to Mirkwood, a horrible forest full of ghastly, giant arachnids, and unfriendly elves.

Imprisoned by the wood elves, Bilbo, wearing his invisible ring, hatches a plan to free his dwarf friends, stuffing them into wine barrels.

Down the hatch, and out into the river, they reach the dragon-destroyed Dale, a lake-town under the mountain, where the dwarves are given a grand send-off to regain their gold.

After, of course, rekindling the local legend of dwarves returning to Dale with riches.

They scale the mountain stronghold; Bilbo breaks in to do burglar business, and confronts Smaug. And all hell breaks loose. More shall not be said.

Light to Dark
The first installment was a tad underwhelming. Director Peter Jackson was rusty, but more than that, it was a tricky thing to nail the light, children’s-book tone of “The Hobbit,” while retaining the darkness of his three previous “Lord of the Ring” blockbusters.

Here, in the second installment, Jackson regains his footing. This is the Hobbit-telling we were all waiting for.

There’s a fair amount of crowd-pleasing in the form of trotting out the old favorites from LOTR. For example, they bring back Legolas the elf. He’s not originally in The Hobbit, but this is artistic license. This is a good thing.

A bad thing is that they bring back a bunch of Peter Jackson’s brand of elves. With the exception of Orlando Bloom’s Legolas, Cate Blanchett’s Galadriel, and Evangeline Lilly’s Tauriel, Jackson’s concept of elves is that they all act like snooty, bleached-blond, longhaired, poncy relatives of Draco Malfoy (Harry Potter’s nemesis). This is wrong. In Tolkien’s world of Middle Earth, elves are the great, enlightened beings, and as such have humility.

Another crowd-pleaser is that Tauriel (a female elf added to create a romantic storyline with Kili the dwarf) was clearly cast because she bears a very strong resemblance to Liv Tyler’s Arwen of LOTR.

There will undoubtedly be objections to and dissertations about the fact that the comical, long-winded introduction of the dwarves by Gandalf to Beorn, has gone missing. As has Beorn’s harsh joviality. Here, he’s a somber fellow.

However, hardcore fans will be pleased with the Jackson-concocted barrel-escape down the rapids. In the book, the dwarves are sealed inside the barrels, but in a movie, that choice cramps the visual possibilities. The protracted riverine fight against orcs, by dwarves, in barrels, is extremely funny. Probably the largest grouping of sustained belly-laughs in all five movies.

Another big concern was whether they would get the Mirkwood spiders right. Oh, they’re right on. They’re horrific. They’re every arachnophobe’s worst nightmare. The only thing that would have made them worse (and more realistic) would have been to give them more of that hair-raising, leg-flailing spider-speediness we all hate. But that would have rendered it unwatchable.

The landscapes are imbued with Middle Earth atmosphere, Radagast the Brown (a wizard) is still an idiot, but less so than in Hobbit 1, and Smaug is the most menacing, magnificent cinematic dragon to date.

Let the record show that the reviewer is not embarrassed of being a Tolkien-geek because he was never the kind who goes to Comic Con wearing elf ears. Not that that’s a bad thing.

“The Lord Of The Rings” and “The Hobbit” are nothing if not the greatest fictional tales of spiritual enlightenment of our times.

If you read the series upwards of twenty times, you may end up wearing elf ears to Comic Con. Upwards of fifty times, and you may try and actually become an elf and seek enlightenment. Just remember, if you act like Draco Malfoy, all bets are off.

For non-Tolkien-geeks, maybe you’ll buy the DVD and enjoy great storytelling every couple of years.