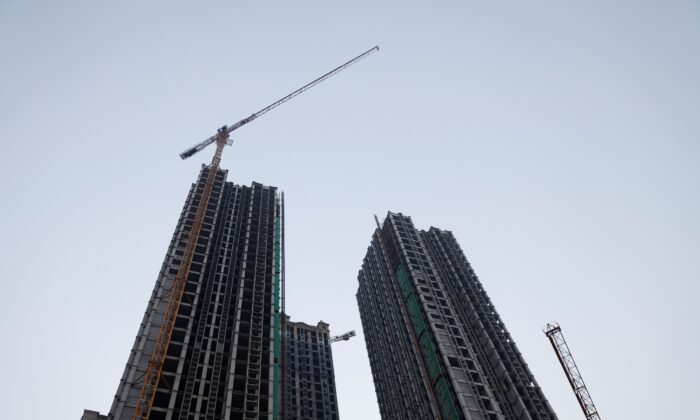 SHANGHAI—Lured by the promise of yields approaching 12 percent, gifts such as Dyson air purifiers and Gucci bags, and the guarantee of China’s top-selling developer, tens of thousands of investors bought wealth management products through China Evergrande Group.

Now, many fear they may never get their investments back after the cash-strapped property developer recently stopped repaying some investors and set off global alarm bells over its massive debt.

Some have been protesting at Evergrande offices, refusing to accept the company’s plan to provide payment with discounted apartments, offices, stores and parking units, which it began to implement on Saturday.

“I bought from the property managers after seeing the ad in the elevator, as I trusted Evergrande for being a Fortune Global 500 company,” said the owner of an Evergrande property in the conglomerate’s home province of Guangdong surnamed Du.

“It’s immoral of Evergrande not to pay my hard-earned money back,” said the investor, who had put 650,000 yuan ($100,533) into Evergrande wealth management products (WMPs) last year at an interest rate of more than 7 percent.

More than 80,000 people–including employees, their families and friends as well as owners of Evergrande properties—bought WMPs that raised more than 100 billion yuan in the past five years, said a sales manager of Evergrande Wealth, launched in 2016 as a peer-to-peer (P2) online lending platform that originally was used to fund its property projects.

Some 40 billion yuan of the investments are outstanding, said the person, declining to be named as they were not authorised to speak with the media.

China Evergrande did not respond to a request for comment on Tuesday, which was a public holiday in China.

With more than $300 billion in debt, Evergrande’s liquidity crisis rattled global markets this week. The company has vowed to repay WMP investors.

China’s years-long effort to deleverage its economy has pushed companies to resort to off-balance sheet investments in search of funding.

Evergrande Wealth started to sell WMPs to individuals in 2019 after a regulatory crackdown led to a collapse of the P2P lending sector, said the sales manager and another Evergrande employee who bought the WMPs.

To attract investors, the sales manager offered gifts such as Dyson air purifiers and Gucci handbags to each person who bought more than 3 million yuan of WMPs during a Christmas promotion last year.

A product leaflet provided by the sales manager seen by Reuters showed the WMPs are categorised as fixed-income products suitable for “conservative investors seeking steady returns”.

In two products sold last November, a construction company in Qingdao was looking to raise up to 10 million yuan with annualised yield of 7 percent in one and 20 million yuan with yields ranging from 7.8 percent to 9.5 percent, depending on the investment size, in another. Minimum investments were 100,000 yuan and 300,000 yuan, respectively.

Evergrande also usually offers additional yield up to 1.8 percent to certain investors, which can push returns to above 11 percent for a 12-month investment, said the sales manager.

Proceeds were to be used for Qingdao Lvye International Construction Co’s working capital, the documents showed. The firm could not be reached for comment during a public holiday.

Repayment would either come from the issuer’s income or from Evergrande Internet Information Service (Shenzhen) Co, a subsidiary that runs Evergrande Wealth and promises to cover the principal and interest if an issuer fails to repay, the prospectus said.

The sales manager said the Qingdao company was working on Evergrande projects and would use the payment from Evergrande upon completion to repay investors.

In a petition to various government bodies, a group of WMP investors in Guangdong accused Evergrande of inappropriately using money that should have gone to the issuers to fund its own projects, and not sufficiently disclosing the risks.

They also complained that they were misled by the stature of its chairman, Hui Ka-yan, noting that he was seated prominently during a 2019 celebration of the 70th anniversary of the founding of the People’s Republic of China.

“The investors trusted Evergrande and bought Evergrande’s WMPs out of our love for and faith in the Party and government,” they wrote.

By Zhang Yan and Tony Munroe