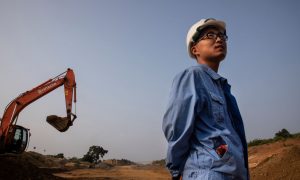 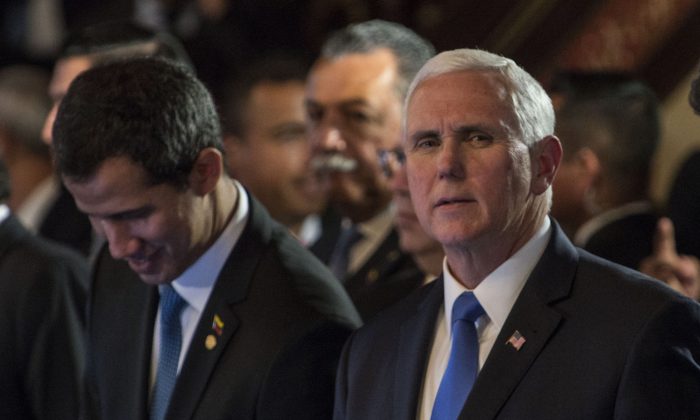 Vice President Mike Pence and Juan Guaido, recognized by Washington and others as Venezuela’s interim president, take part in a meeting with foreign ministers of the Lima Group at Colombia's Foreign Affairs Ministry in Bogota Feb. 25, 2019. (Diana Sanchez/AFP/Getty Images)
Viewpoints

With China Cash, Venezuela Could Go From the Frying Pan Into the Fire

Venezuela has reached the latter stages of socialism, with devalued money littering the streets, and with starving citizens being forced to eat rotten meat from the garbage. Citizens opposed to Nicolas Maduro’s socialist experiment are protesting in the streets, and Maduro regime forces are shooting them.

It’s likely the days of the Maduro regime are coming to a close, however, with the Trump administration recognizing Juan Guaido as the acting president of Venezuela.

Yet, the future of Venezuela could still swing in either direction

There’s an old Chinese saying that a sick man will seek any doctor, and as the Venezuelan people and their new government look to any solution to fix their political troubles they’ve turned their eyes to China.

Guaido’s head of the Inter-American Development Bank (IADB) for the interim government, Ricardo Hausmann, believes that China could play a “large role” in rebuilding Venezuela. He also called on the Chinese regime to communicate with Guaido.

“China needs to assure its energy supplies and Venezuela has very large oil reserves, probably the largest in the world,” Hausmann said, according to the South China Morning Post.

He added that after Maduro is removed, “Venezuela is a country that needs to be reconstructed. China can have a very large role to play in that process.”

The Chinese regime has an established record of using loans and infrastructure projects in its Belt and Road initiative to lock countries down in debt traps. Included on the list of nations that have fallen into these traps are Malaysia, Pakistan, Sri Lanka, and many others.

The Philippines was well on its way towards one of the Chinese regime’s debt traps, but recently announced it found a way to potentially pay off its debt before it’s too late.

In Sri Lanka in 2005, local officials turned to China for economic help in order to recover from damage caused by the 2004 Indian Ocean tsunami. The Chinese regime was quick to jump on the offer, and gave over $1.1 billion to build its Hambantota Port. When Sri Lanka couldn’t repay the loan, the Chinese regime repaid itself by taking control of the port.

During his election in 2015, Sri Lanka President Maithripala Sirisena addressed the looming crisis of China’s debt traps. In his election manifesto, he said the “credit money received from abroad” was a “mega ransom that goes to a few individuals,” and was resulting in Sri Lanka’s property falling into “the hands of foreigners.”

“If this trend continues for another six years our country would become a colony, and we would become slaves,” he wrote.

The Chinese regime is playing a careful game in Venezuela. On the business side it isn’t demonstrating much interest. The Chinese regime denied Hausmann’s visa to attend the annual IADB conference, which is this year being held in Chengdu, China. (IADB is the largest lender to Latin America, and is headquartered in Washington.)

Yet on the military side, the Chinese regime is playing a different tune that demonstrates its clear interest in shaping the future of Venezuela.

Russia recently deployed troops to Venezuela, and both Russia and China are backing the Maduro regime—going against the stance of the United States that the opposition faction under Guaido is the official acting government.

In response to Russia’s military deployment, John Bolton, the U.S. Assistant to the President for National Security Affairs, tweeted that “The United States will not tolerate hostile foreign military powers meddling with the Western Hemisphere’s shared goals of democracy, security, and the rule of law. The Venezuelan military must stand with the people of Venezuela.”

Then, in response to Russia sending military troops to Venezuela, Chinese Foreign Ministry spokesperson Geng Shuang criticized the United States for opposing Russia’s actions. He said, according to Newsweek, that Latin America is not “a certain country’s backyard.”

Of course, Venezuela has for a very long time been China’s backyard—alongside the rest of the Socialist countries in Latin America that broke from the U.S.-led model with the “pink tide” in the 1990s and 2000s.

And the Chinese regime doesn’t seem keen on losing this. Shuang stated, “China would like to work with the international community to help Venezuela restore stability at an early date.” What he meant here by “international community” was unlikely the U.S. response, which he criticized, but instead the Russian response of sending troops.

China quietly walked Venezuela into the state of crisis. During a 2017 Foreign Affairs Committee hearing, Evan Ellis, a senior associate at the Center for Strategic and International Studies, explained how Russia and China were behind the Maduro regime.

“I would like to emphasize how both Russia and China, in the pursuit of their commercial and strategic interests in Venezuela, have provided capital, goods, services, and political backing that has indirectly enabled the populist regime to ignore and ultimately destroy the mechanisms of democratic accountability,” he said.

Ellis then explained the process that China and Russia used to keep the Maduro regime afloat, and how the Chinese regime in particular used this to gain control over key Venezuelan infrastructure.

The chaos in Venezuela fits in with a long-established strategy that Russia and China know all too well, and both have played a large role in walking the Maduro regime along to its present state.

When it comes to subversion, also known as active measures, the Soviet model developed along four stages: demoralization to alter the thinking and will of the population; destablization to break the foundations of the society; the creation of a crisis; then a manufactured response to that crisis to seize control of the targeted nation known as “normalization.”

Venezuela now sits at the stage of chaos, and Russia and China are looking to “normalize” the situation.

Ellis stated in 2017: “I believe that Russia and China as much as everyone else wants a transition away from the Maduro regime. But what they want to transition to is very different.

“I believe that they are hoping they can get a transition to an equally anti-U.S. authoritarian regime that will let them legally legitimize their holdings.”

Of course, it doesn’t have to be this way. Guaido sits at a crossroads between the U.S. model and the China model, and the United States is left with a choice on how to respond to Russia’s troop deployment. These factors will have a large role in determining Venezuela’s future.