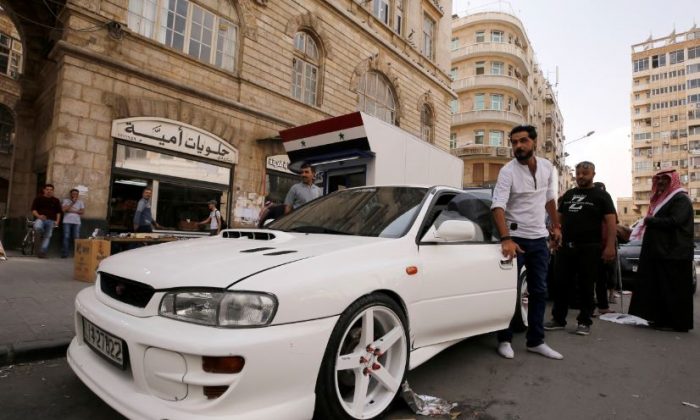 DAMASCUS, Syria/JABER, Jordan—Jordanians are flocking to the Syrian capital Damascus for the first time in years for tourism and trade after the reopening of a border crossing that had been closed through years of war.

The border opened to people and goods on Oct. 15, restoring a route that had carried billions of dollars in trade for the region.

“The first day that Syria opened up, I came. This is my second time since then,” said Mahmoud Nassar, 62, a flight engineer from Jordan’s northern city of Ramtha.

“This is a visit of tourism and of yearning for (Damascus),” said Nassar, who drove in with his father and son. “The road is safe and there were no problems.”

Syrian government forces retook the border region with Jordan from rebels in July during a Russian-backed offensive.

The crossing had been closed since rebels captured it in 2015, though many are making the trip for the first time since 2011, when the Syrian conflict first erupted.

The Jordanian side of the frontier was jammed with vehicles waiting to cross on Oct. 26. “What we see is the situation is good, things are fine,” said Razzan al-Hattab, a Jordanian waiting to cross. “I love Sham (Damascus), so I wanted to be one of the first to try going in a tourist group.”

‘I Will Visit Every week’

The closure of the border has hit both the Syrian and Jordanian economies. “Before the border closed, our work was great,” said Jawad al-Zoubi, waiting to cross. But for “the last seven years, we’ve not been able to pay school fees”, he said.

Bahjat Rizik, in Damascus with his wife and son, said the last time he made the three-hour drive from Amman was before the war began. He used to bring office furniture to sell in Syria and owned a gallery in the Yarmouk district near Damascus.

“I will visit every week,” said Rizik, carrying bags of children’s clothes and spices with his family.

“God willing, we can get back to work.”

Bilal Bashi, who runs a company selling abayas in Damascus, said he had seen more Jordanian tourists and shoppers since the crossing opened. “No doubt there will be an economic (boost). It will have a positive effect,” he said at the historic Souk al-Hamidieh market in the Old City of Damascus.

Still, Raed Maseh, another Syrian trader, said the increase in Jordanian visitors had not had a real impact yet and hoped more people would come.

The Syrian war further added to the strain on an already difficult relationship between Damascus and Amman. U.S.-allied Jordan provided support to some of the insurgents fighting President Bashar al-Assad.

But diplomatic ties were not severed entirely and Syria’s relations with Jordan never turned as hostile as they did with some other regional states, notably Turkey which remains a major backer of the opposition.

Intisar Murshid, the head of a Damascus hotel, said she received some 14 Jordanian guests on the first day the crossing opened. They came to shop, work, or visit relatives.

“For eight years we did not see Jordanians, very rarely.”