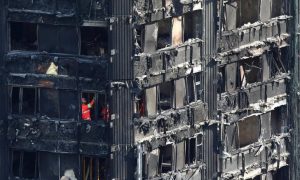 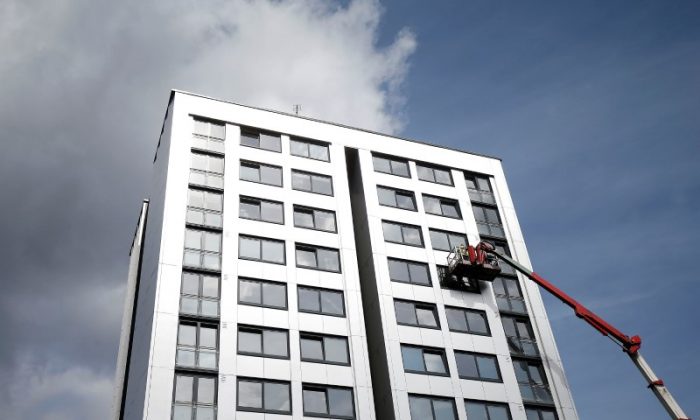 Cladding is removed from the side of Whitebean Court in Salford, Manchester, Britain June 26, 2017. (Reuters/Andrew Yates)
Europe

LONDON—British Prime Minister Theresa May appealed to landlords of high-rise buildings on Monday to allow potentially flammable building material to be tested, seeking to reassure residents after a tower block fire killed 79 people in London.

The Grenfell Tower blaze, which trapped dozens of people in their beds, has become a focus of anger at the Conservative government’s austerity cuts and the perceived slow response in trying to look after those who escaped.

It was “concerning” that 100 percent of tests done on the “cladding” — panels placed on the outside of buildings — from 60 high-rise blocks in England had failed combustibility checks, May’s spokesman said.

May, who scored a deal with a Northern Irish party to prop up her minority government on Monday, wants to repair her authority by showing leadership in dealing with the aftermath of the June 14 Grenfell disaster, but faces criticism by her political opponents.

“Clearly it’s concerning, concerning for residents who are living in these blocks,” the spokesman told reporters at a regular government briefing.

“That’s why we have put in place a system where testing can be carried out very quickly and whereby local authorities are informed immediately when a positive test comes back and that appropriate measures are put in place,” he said.

Responding to criticism that the testing program was not running quickly enough, he said landlords must get potentially flammable building materials tested as soon as possible.

Material should also be tested in schools and hospitals if there were safety concerns there too.

Some six hundred buildings are being tested, showing how widely combustible cladding may have been used across Britain.

“It is clearly of huge concern that this is the case, the spokesman said.

“What is apparent is that this is on buildings across the country … Obviously the job for the public inquiry will be to find out how and why this happened,” he said, hoping there would be an earlier interim report to cast some light on why such materials were used and whether they met safety requirements.