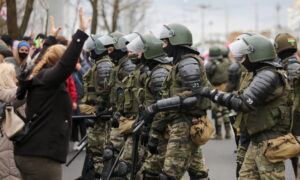 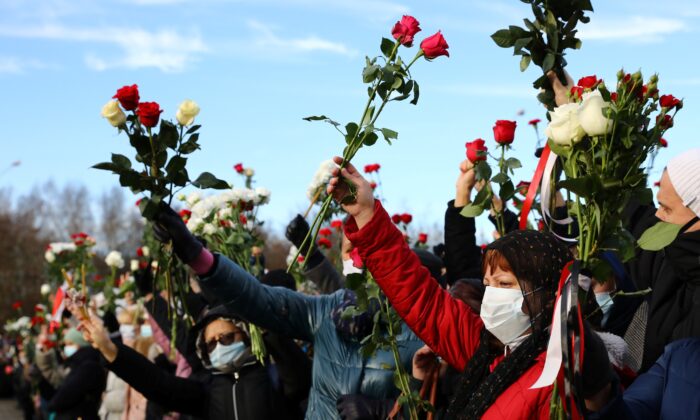 People hold flowers as they gather outside a church during a memorial service for Roman Bondarenko, an anti-government protester who died in hospital following what witnesses said was a severe beating by security forces, in Minsk, Belarus, on Nov. 20, 2020. (BelaPAN via Reuters)
Europe

With Applause and Flowers, Thousands Attend Funeral of Belarusian Protester

KYIV—Thousands of people silently raised their arms in the air, held flowers aloft, and broke into chants outside a church in Minsk on Friday at the funeral of a Belarusian protester.

The death of 31-year-old Roman Bondarenko has become the latest flashpoint in months-long mass protests against President Alexander Lukashenko. He died in hospital last week after what protesters say was a severe beating by security forces.

The interior ministry denied responsibility. The death was condemned by the European Union who on Thursday announced new sanctions on Minsk in response to state repression against protesters following a disputed August election.

His opponents accuse Lukashenko of rigging the election to extend his 26-year grip on power. He denies electoral fraud and, backed by Russia, has refused to resign.

The crowd outside the church, the majority wearing masks, chanted “I’m going out”, the last known written words of Bondarenko, and “long live Belarus”.

Cars blared their horns in the street. Thousands broke into applause as the coffin was carried out of the church.

The authorities this week detained a medic who leaked a medical report of Bondarenko’s death to the media. The medical report showed there was no alcohol in Bondarenko’s bloodstream, casting doubt on the government’s assertion that Bondarenko had been drunk and died in a scuffle with civilians.

The Prosecutor General’s office opened a criminal investigation into the medic for revealing medical secrets, spreading false information, and fueling tensions in society. A journalist who published the report was also detained.

The EU has already imposed travel bans and asset freezes on almost 50 Belarusian officials. The new sanctions are expected to target more senior officials and also entities that finance Lukashenko and his government.

United Nations human rights experts said on Thursday they were gravely concerned by increased reports of mass detentions, intimidation, and torture. They called on the Belarusian authorities to investigate the excessive use of force and unlawful retaliation at peaceful protests.

Tens of thousands of people have staged regular protests for weeks since the election. Some workers at major state-run companies went on strike. This week, potash producer Belaruskali said 49 workers had been fired for taking part in the strike.