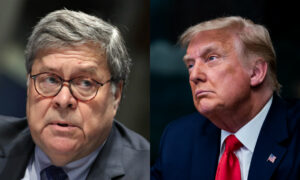 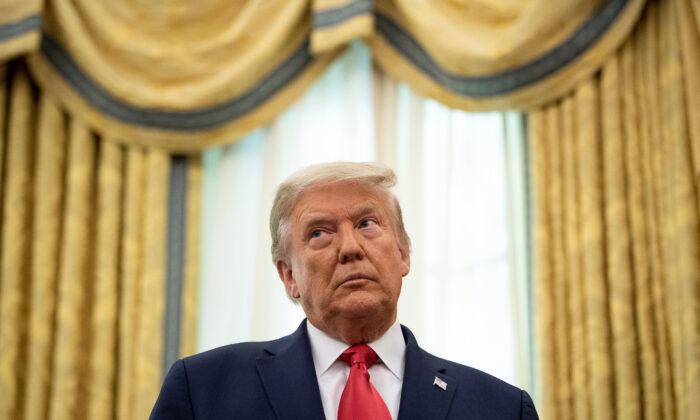 President Donald Trump listens during a Medal of Freedom ceremony for Lou Holtz in the Oval Office of the White House on Dec. 3, 2020. (Brendan Smialowski/AFP via Getty Images)
Wisconsin

Wisconsin’s top court rejected a lawsuit from President Donald Trump’s campaign that sought to challenge the results of the presidential election.

The 4–3 ruling on Dec. 3 ordered the campaign to file an appeal first in circuit court.

The 10-page ruling included signs of dissent, with justices acknowledging there are valid concerns about how the election was conducted.

Justice Brian Hagedorn says he understood the impulse to address legal questions presented by the petition but that such questions needed to be addressed by lower courts.

“The parties clearly disagree on some basic factual issues, supported at times by competing affidavits,” he wrote. “I do not know how we could address all the legal issues raised in the petition without sorting through these matters, a task we are neither well-positioned nor institutionally designed to do. The statutory process assigns this responsibility to the circuit court.”

Justice Patience Drake Roggensack wrote in a dissenting opinion, though, that the Wisconsin Supreme Court does have subject-matter jurisdiction.

“However, fact-finding may be central to our evaluation of some of the questions presented. I agree that the circuit court should examine the record presented during the canvasses to make factual findings where legal challenges to the vote turn on questions of fact. However, I dissent because I would grant the petition for original action, refer for necessary factual findings to the circuit court, who would then report its factual findings to us, and we would decide the important legal questions presented,” Roggensack wrote, in an opinion joined by Justice Annette Ziegler.

“I also write separately to emphasize that by denying this petition, and requiring both the factual questions and legal questions be resolved first by a circuit court, four justices of this court are ignoring that there are significant time constraints that may preclude our deciding significant legal issues that cry out for resolution by the Wisconsin Supreme Court.”

Justice Rebecca Grassl Bradley wrote in a separate dissenting opinion that the court “forsakes its duty to the people of Wisconsin in declining to decide whether election officials complied with Wisconsin’s election laws in administering the November 3, 2020, election.”

“Instead, a majority of this court passively permits the Wisconsin Elections Commission (WEC) to decree its own election rules, thereby overriding the will of the people as expressed in the election laws enacted by the people’s elected representatives. Allowing six unelected commissioners to make the law governing elections, without the consent of the governed, deals a death blow to democracy,” she wrote.

The Trump campaign didn’t immediately respond to a request by The Epoch Times for comment. A spokesman for the elections commission told The Epoch Times via email it doesn’t comment on lawsuits.

Gov. Tony Evers, a Democrat, told reporters during a Dec. 3 press briefing: “I thought it was a good decision. I was frankly amazed that it was not unanimous.”

“It would have disenfranchised hundreds of thousands of people in the state of Wisconsin,” he added.

Wisconsin’s Supreme Court justices are elected to 10-year terms in statewide, nonpartisan April elections, according to the court’s website. Vacancies are filled by gubernatorial appointment and the appointee is required to stand for election to a full 10-year term during the next spring election that another justice isn’t already on the ballot.

Trump’s campaign argued in a lawsuit that state election officials violated the law by improperly counting at least 170,140 ballots without the voter first submitting a written application stating why they were “indefinitely confined.” The campaign also alleged other irregularities concerning absentee ballots.

The election commission said in a court filing that the concerns were “untimely raised legal agreements” and had urged justices not to take the case, asserting that it belonged in circuit court.

State lawyers filing a response for Evers accused Trump’s campaign of attempting to “overturn the will of nearly 3.3 million Wisconsin voters” in “a shocking and outrageous assault on our democracy.”

Trump’s campaign filed a separate suit on Dec. 2 against the elections commission, asking the U.S. District Court for the Eastern District of Wisconsin, Milwaukee Division, to forward the matter to the state legislature.