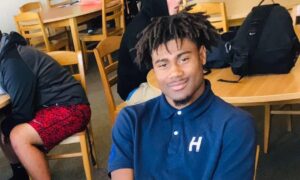 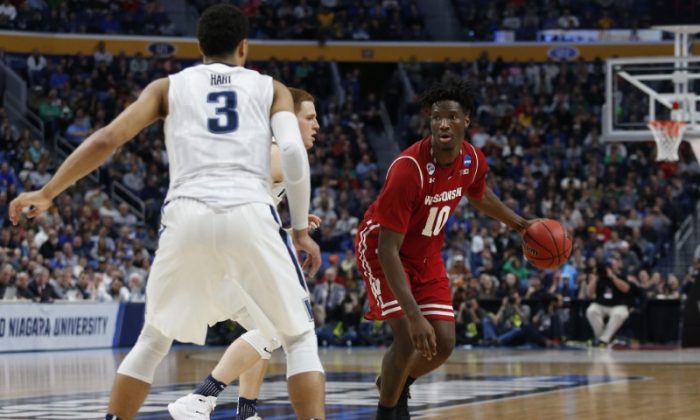 Wisconsin Badgers forward Nigel Hayes (10) dribbles the ball against Villanova Wildcats guard Josh Hart (3) and guard Donte DiVincenzo (behind Hart) in the second half during the second round of the 2017 NCAA Tournament at KeyBank Center, March 18, 2017. (Timothy T. Ludwig-USA TODAY Sports)
College Sports

“Seeds don’t matter,” Wisconsin coach Greg Gard said after his team beat the top-seeded Wildcats. “I told these guys, I don’t care where we’re seeded. We have to win six games. Let’s start with these two this weekend.”

Bronson Koenig added 17 points, including two late three-pointers, for the Badgers (27–9), who are returning to the Sweet 16 for the fourth straight season. Ethan Happ had 12 points and eight rebounds and Vitto Brown scored 10 points.

Josh Hart had 19 points for the Wildcats (32–4). Donte DiVincenzo added 15 points and Jalen Brunson had 11.

“Give them all the credit,” Hart said. “They’re a heck of a team. They made great adjustments.”

This was Wisconsin’s third victory over a number one seed in the last four years.

“All those games we’ve been the underdog,” Hayes said. “You have all types of ranking systems, statistics, analytics guys that they put. The thing with all those algorithms, they can’t calculate heart, will to win, toughness, desire. They can’t put that into a formula to come out with a percentage chance to win, and that’s the thing that we have.”

Wisconsin shot 53 percent, improving to 17–0 this season when making more than 45 percent of its field goals.

Neither team led by more than eight points in a game that went down to the wire.

After DiVincenzo stole the ball at midcourt and made one of two free throws to tie the score, Hayes drove the baseline and scored on a reverse layup to put Wisconsin ahead 64–62.

Hart worked his way into the paint to try and tie the score for Villanova, but Happ held his ground inside and Hart lost the ball.

Brown was fouled but missed the second of two free throws with 3.4 seconds remaining. DiVincenzo grabbed the rebound, but Villanova was unable to get off a shot.