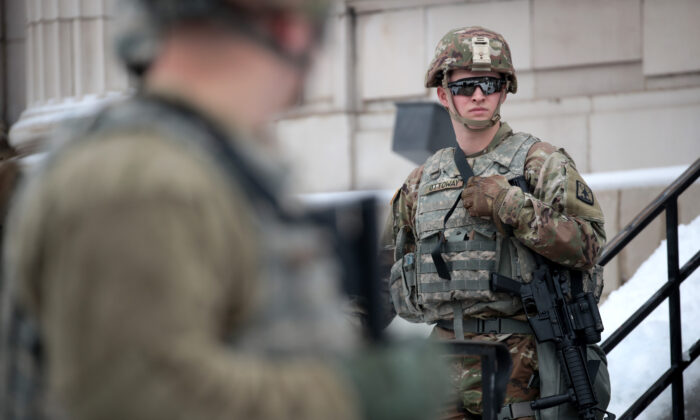 The Wisconsin National Guard is prepared to deploy to Kenosha as Kyle Rittenhouse’s trial nears its end.

Rittenhouse’s defense lawyers rested their case Thursday. The jury is scheduled to start weighing a verdict next week after closing arguments.

Maj. Joe Trovato, a spokesman for the Wisconsin National Guard, told The Epoch Times that the Guard is in close contact with local partners.

“We are prepared to mobilize and remain ready to assist, if needed,” Trovato said in an email.

“The governor has already prepared the Wisconsin National Guard for mobilization,” a spokeswoman for Wisconsin Gov. Tony Evers, a Democrat, told news outlets in a statement.

Evers previously sent about 500 Guardsmen in January before prosecutors decided against charging the officer who shot Jacob Blake. Blake resisted arrest and wielded a knife before being shot, but his shooting triggered riots in Kenosha.

The Kenosha County Sheriff’s Office and Kenosha Police Department said in a media release that they “have been and will continue to monitor” Rittenhouse’s trial, adding, “We recognize that some varying opinions and feelings revolve around the trial may cause concerns.”

The departments are working in conjunction with local, state, and federal law enforcement partners “to ensure the safety of our communities,” the release stated.

Rittenhouse, 18, was charged with several counts of murder for fatally shooting two men and wounding another on Aug. 25, 2020.

Rittenhouse says he acted in self-defense after the first man charged him. The other shootings took place after a man struck him with a skateboard and reached for his weapon and another man pointed a gun at him.

Prosecutors have made the case that Rittenhouse should not have fired his weapon.

Some social media accounts linked to the Antifa extremist group have called for violence against Rittenhouse or riots due to predictions he will be acquitted, Post-Millenial editor Andy Ngo reported.

Authorities elsewhere are also preparing for potential unrest after a verdict is announced.

The Chicago Police Department sent a memorandum to officers this week informing them they would only have one day off this weekend. While the force said the move stemmed from “current crime patterns,” Lodge 7 of the Fraternal Order of Police President John Catanzara said it was due to expected “upheaval” from the trial.

Portland police officials, meanwhile, have said they’re keeping tabs on the trial while the Los Angeles Police Department said it would have a sufficient number of officers ready in case anything happened.

Crucial elements of preparation include having adequate personnel and equipment, and having a plan of action in place, Sgt. Betsy Brantner Smith, spokeswoman for the National Police Association, told The Epoch Times.

Law enforcement officials and prosecutors emphasizing to the public that they can protest peacefully but violence will not be tolerated would be ideal, added Smith, who believes law enforcement has learned from the riots in 2020, when some agencies were caught off guard, but plans may be more difficult in areas that have cut police funding and staffing levels.

“These law enforcement jurisdictions are going to have to allow safe places for people to to to express their displeasure but then they need to make it clear, the minute that this turns violent, we’re going to take action,” she said.