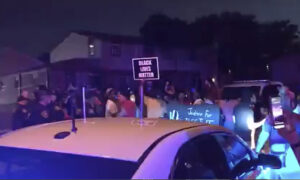 Trump to Be Briefed on Police Shooting of Wisconsin Man
0 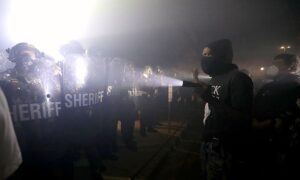 'He Just Got Bricked': Officer Injured During Wisconsin Riots
0 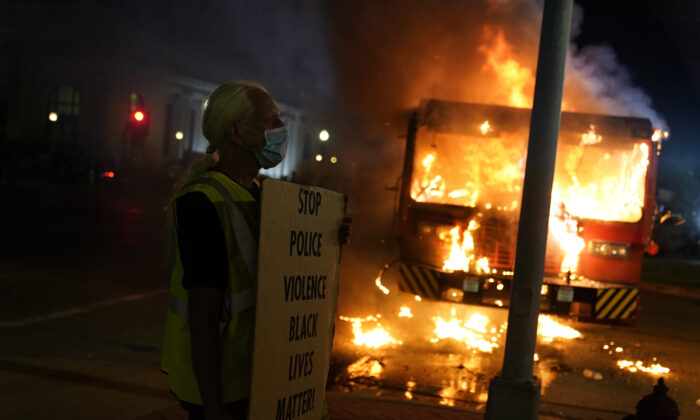 A man stands with a "Black Lives Matter" sign near a burning garbage truck in Kenosha, Wis., on Aug. 24, 2020. (Morry Gash/AP Photo)
US News

The National Guard was deployed Monday to Kenosha County, Wisconsin, following rioting, looting, and arson incidents in the wake of an officer-involved shooting. But now, Wisconsin Gov. Tony Evers said that more troops will be deployed on Tuesday.

“The ability to exercise First Amendment rights is a critically important part of our democracy and the pursuit of justice. But there remains a line between peaceful assembly and what we saw last night that put individuals, families, and businesses in danger,” Evers, a Democrat, said in a news release.

“We are assessing the damage to state property and will be increasing the presence of the Wisconsin National Guard to ensure individuals can exercise their right safely, protect state buildings and critical infrastructure, and support first responders and firefighters,” he added.

Evers called on protesters to be peaceful and safe.

A state of emergency was declared again on Tuesday and a curfew will be implemented starting at 8 p.m. east of Interstate 94. The curfew will last until 7 a.m. Wednesday.

“Please do not allow the actions of a few distract us from the work we must do together to demand justice, equity, and accountability,” he stressed.

He said the declaration of a state of emergency at 11 p.m. Sunday started the process of the National Guard being gathered and sent to the city.

But after the deployment announcement, some Kenosha County officials told the paper that the process should not have taken so long.

“Myself and other supervisors were knocking on the doors of other supervisors at 2 a.m. because the National Guard hadn’t been sent to Kenosha,” County Supervisor Zach Rodriguez said Monday, according to the Kenosha News.

The unrest was triggered after a viral video appeared to show a 29-year-old black man, identified as Jacob Blake, being shot by an officer at close range. Blake fought with police officers on the side of a residential street in Kenosha over the weekend before walking away from officers who had their guns drawn.

When he opened the driver’s side door of a van and reached inside, two officers fired multiple times.

Wisconsin officials said an investigation into the shooting is underway.

Only 1 In 10 Manhattan Office Workers Back at Desks, Hurting Local Businesses
0