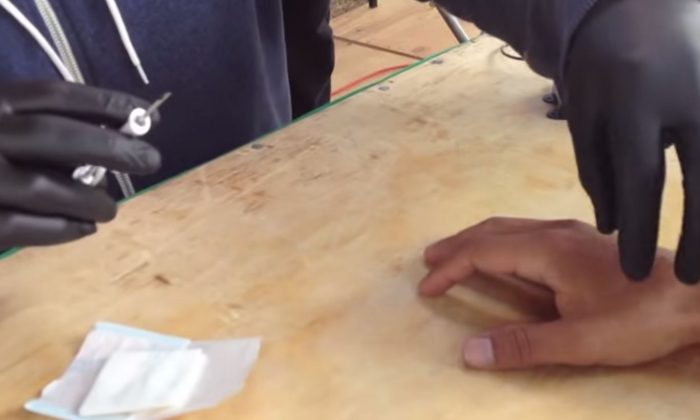 A YouTube screenshot shows the process of implanting an RFID microchip in a man's hand. (YouTube channel: Andy Greenberg/ Screenshot)
US

A Wisconsin firm is offering to implant microchips in its employees, becoming the first to do so in the United States, according to media reports on Monday.

“It’s the next thing that’s inevitably going to happen, and we want to be a part of it,” Three Square Market Chief Executive Officer Todd Westby told KSTP. The firm, based in River Falls, Wis., makes self-service “micro markets” to businesses around the world. It was inspired by the micro-chipping efforts taking place in Sweden.

It’s offering a tiny radio-frequency identification (RFID) chip worth about $300 into workers’ hands for free.

The RFID chip will allow workers to open doors, log into computers, and purchase food.

Fifty employees at Three Square Market have signed up to be micro-chipped, the firm said.

McMullan claimed that everyone will soon want a microchip implanted in their hands.

“The international market place is wide open and we believe that the future trajectory of total market share is going to be driven by whoever captures this arena first,” McMullan said in a press release.

CEO Todd Westby said that employees worried about their privacy shouldn’t be alarmed.

“There’s no GPS tracking at all,” he said.

“We foresee the use of RFID technology to drive everything from making purchases in our office break room market, opening doors, use of copy machines, logging into our office computers, unlocking phones, sharing business cards, storing medical/health information, and used as payment at other RFID terminals,” Wesby elaborated in the press release. ” Eventually, this technology will become standardized allowing you to use this as your passport, public transit, all purchasing opportunities, etc.”

In April, it was reported that Swedish startup firm Epicenter started implanting chips the size of a grain of rice in workers’ hand. It also allows them to operate printers, open doors, or purchase food—with the wave of a hand.

“The biggest benefit I think is convenience,” said Patrick Mesterton, AP reported at the time. “It basically replaces a lot of things you have, other communication devices, whether it be credit cards or keys.”

RFID chips have been implanted in pets for years and companies use them to track deliveries.