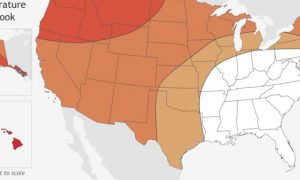 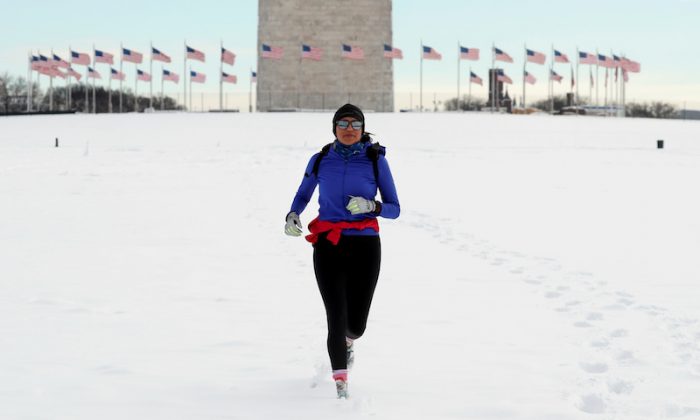 A jogger makes her way through snow at the Washington Monument following a winter storm, Jan. 14, 2019. (Kevin Lamarque/Reuters/File Photo)
US News

A winter storm that blanketed the U.S. Midwest with snow advanced on the U.S. Northeast on Saturday, Jan. 19, forcing cancellations of flights and train service during a holiday weekend when many Americans were traveling.

The Weather Service issued winter storm warnings or advisories for a swath of the eastern United States that is home to 100 million people, said meteorologist Rich Otto of the U.S. Weather Prediction Center.

The storm system, which was moving from west to east and was strengthened by arctic air from Canada, hit many parts of the Midwest on Jan. 18, according to the National Weather Service.

In Chicago, where some neighborhoods received 8 inches of snow, a third of flights were canceled at the city’s two main airports, said Mark Duell, vice president of operations for tracking firm FlightAware.

There were 2,141 flight cancellations within, into or out of the United States on Jan. 19, FlightAware reported.

On Saturday, Jan. 19, TSA reported that 7 percent of its employees were absent, with many unable to work due to “financial limitations.”

The storm was expected to dump up to 2 feet of snow on the Northeast starting on Saturday evening, with snowfall likely to last until Monday, Jan. 21, in upstate New York and Maine, Otto said.

New York City was expected to receive up to 2 inches of snow.

Parts of the East Coast will get gusty winds that bring the coldest air it has seen all winter, according to the National Weather Service. For instance, the temperature in Boston could drop to 6 degrees Fahrenheit, on Sunday, Jan. 20.

The governors of New Jersey and Pennsylvania declared emergencies for their states ahead of the storm, warning of high snow accumulation and potential flooding in some areas.

The storm was sweeping across the eastern United States ahead of Martin Luther King Jr. Day on Monday, a holiday honoring the late civil rights leader.

The TSA had said it expected the long weekend to be busy for travel. From Friday (Jan. 18) through Sunday (Jan. 20), the severe weather was expected to trigger the cancellation of more than 3,000 flights in the United States, Duell said.

Meanwhile, in parts of the Northeast, the Weather Service warned snow-covered roads could leave some people stranded from late Jan. 19 to Jan. 20.

“If you don’t have to be on the roads, we recommend staying in and staying safe,” Automobile Association of America spokeswoman Jeanette Casselano said in a phone interview.

Amtrak canceled train service from Chicago to Boston, Washington, and New York on Jan. 19 and canceled and modified several routes that originate and end on the East Coast on Jan. 20.