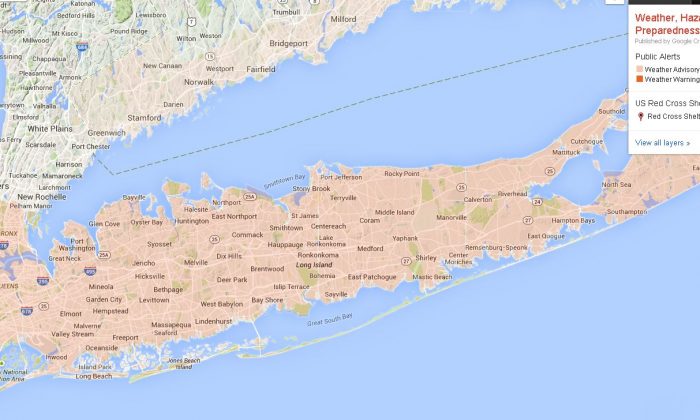 New York City, Long Island, and New Jersey will get hit with snow starting Wednesday night and lasting until Thursday.

“Heavy snow” is expected, says the National Weather Service in an alert.

Between 4 and 7 inches of snow can be expected in the New York metro area.

As for the timing, the agency adds that “rain mixes with sleet and snow this evening, before changing to all snow after midnight. Snow may be heavy at times late tonight through Thursday morning, before tapering off late Thursday afternoon and into Thursday evening.”

There will also be hazardous travel–namely driving–conditions, which include icy roads, reduce visibility, and “significant snow accumulations.” The visibility will be reduced to “one quarter to one half mile at times,” the Service adds.

“A Winter Storm Warning for heavy snow means severe winter weather conditions are expected or occurring. Significant amounts of snow are forecast that will make travel dangerous. Only Travel in an emergency. If you must travel, keep an extra flashlight, food. And Water in your vehicle in case of an emergency,” the agency recommends.

Farther east, rain should mix with or change to snow in a swath from the central Appalachians to far southern New England, including the New York City, Philadelphia and Pittsburgh metro areas.

Farther south, precipitation may transition to freezing rain or sleet, before switching to snow around sunrise in Baltimore and Washington, D.C.