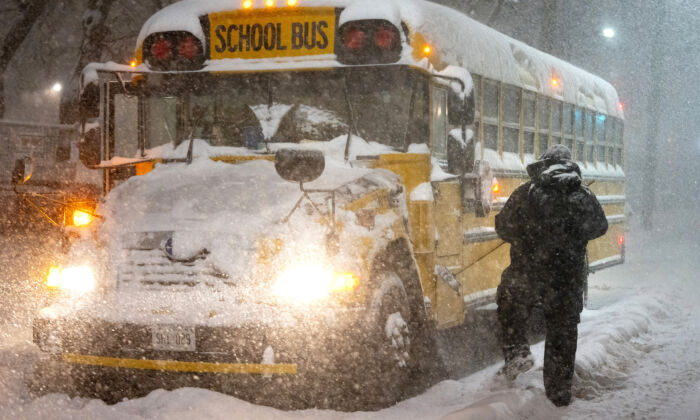 A school bus driver tries to clear snow as a winter storm causes the closure of schools in Toronto on January 17, 2022. (The Canadian Press/Frank Gunn)
Canada

A winter storm plowing through a large swath of southern Ontario is causing widespread school closures and transportation disruptions.

Environment Canada has issued snowfall or blizzard warnings for a stretch of the province spanning from the Cornwall area to the east, the Algonquin region to the west, and the Niagara and London regions to the south.

As much as 50 centimetres of snow is expected in some areas, and the weather agency is warning residents to be cautious given the risk of reduced visibility on the road.

The weather prompted many school boards to cancel school bus service and in-person classes just as schools were set to reopen following weeks of online learning.

Dozens of flights to and from Toronto’s Pearson airport were also delayed or cancelled this morning, according to the airport’s website.

Public transit in the Toronto area is also affected by the weather, with the regional GO Transit network saying a number of its bus routes would be temporarily suspended or adjusted for safety.

The Toronto Transit Commission says customers should also expect longer than normal wait and travel times as the snow affects all its bus and streetcar routes.

Meanwhile, officials in Niagara Region say a number of public facilities, including a mass immunization clinic in Niagara Falls and all regionally operated daycare and childcare centres, will be closed today.