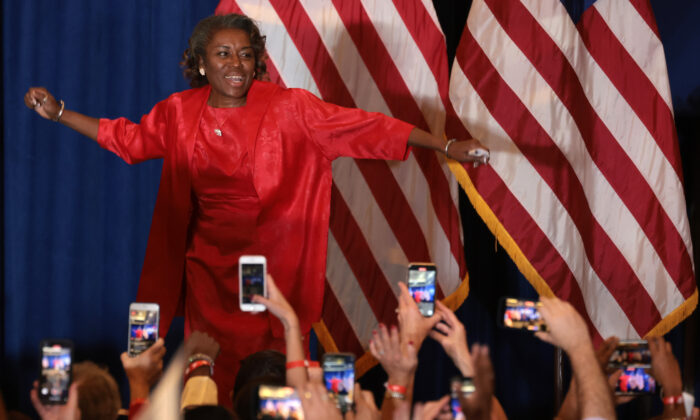 The significance of Virginia Lt. Governor-elect Winsome Sears’ victory cannot be overstated. But her victory is significant not only because she is a black woman and the “first” of her race and gender to hold the office of lieutenant governor in Virginia, but also because she has been described as an anti-racist. Sears does not buy into a victimhood that characterizes the Democratic Party’s view of people of color.

In her victory address, she said: “I’m telling you that what you are looking at is the American dream.”

I recall seeing white racists jeering at black students integrating a high school in Arkansas and a university in Mississippi. Last week the polarization was reversed with love replacing hate. Sears stood on a stage with her husband and two daughters and was cheered by a crowd that included many white people in Richmond, once the capital of the Confederacy.

She recounted her personal story: “When my father came to this country (from Jamaica) Aug. 11 of 1963, he came at the height of the civil rights movement. … I said to him it was such a bad time for us, why did you come, and he said, ‘because America was where the jobs and the opportunities were.’ And he only came with $1.75, took any job he could find, and put himself through school. … He came and got me when I was six years old.”

Sears said when she joined the Marine Corps, she was still a Jamaican citizen, “but this country has done so much for me I was willing to die for this country.”

She then drove a stake into the heart of the Democrats’ appeal to racism, discrimination, and victimhood which the party has sold to black people for generations: “There are some who want to divide us, and we must not let that happen. They would like us to believe we are back in 1963.” She then lowered the hammer about the progress made since then: “We can live where we want. We can eat where we want. We own the water fountains. We have had a black president elected, not once, but twice, and here I am living proof.” She could have added that Virginia previously elected a black governor, Douglas Wilder, a Democrat.

When was the last time a modern Democrat politician talked like Winsome Sears? Here is a role model for everyone, not just minorities: an intact family; a sense of duty to, and love of America; a strong work ethic; and a refusal to allow the dislike of others to keep one from pursuing the American dream.

Some cable news commentators claimed the Republican sweep in Virginia (Republicans also took back the House of Delegates) was because white racists turned out to vote in large numbers. New York Times columnist Charles Blow blamed “racial anxiety.” In addition to Sears’ profile, the incoming attorney general, Republican Jason Miyares, will be the state’s first Latino in that office. That charge doesn’t fly anymore.

Winsome Sears is the left’s worst nightmare. She is proof that anyone can achieve their dreams in America if they follow the right path. She and Governor-elect Glenn Youngkin are also open about their Christian faith, while the Democratic Party is increasingly the home of secular progressives. Serious faith plays well in rural areas and in the heartland, especially as cancel culture, wokeness, and critical race theory are being imposed on conservative voters.

The word “winsome” means “sweetly or innocently charming; winning; engaging.” Sears is all three. She is joined by other winners with similar stories of overcoming obstacles. Sen. Tim Scott (R-S.C.) and Justice Clarence Thomas are two of the better known. Winsome Sears adds to a growing number of people who refuse to allow the negative views of others to prevent them from achieving their goals.

There will be more as people of color realize they’ve been sold a lie by the left and that the future—their future—belongs to them and no one else.