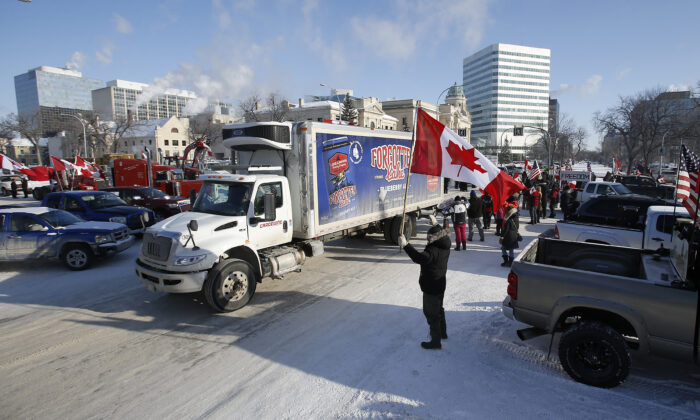 People rally against provincial and federal COVID-19 mandates and restrictions outside the Manitoba Legislature in Winnipeg on Feb. 4, 2022. (The Canadian Press/John Woods)
Viewpoints

Winnipeg Vehicle Attack on Trucker Protesters a Warning for Politicians, Legacy Media to Calm the Situation

Canadians were horrified when video footage of a car careening through pedestrians at a Winnipeg protest began making the rounds on the internet. We couldn’t help but be reminded of the scene from Charlottesville, Virginia, in 2017 when James Alex Fields killed one and injured dozens as he plowed his car into a densely packed protest. Thankfully, while four people were injured in the Winnipeg attack, nobody was killed.

David Alexander Zegarac has now been criminally charged and is in custody. We may never know what inspired him to allegedly drive his jeep through a crowd of peaceful protesters on the night of Feb. 4 in Winnipeg. That dangerous event is a symptom of an increasingly tense atmosphere in Canada as anti-mandate protests continue to grow across the country, while legacy media and political leaders continue to villainize the demonstrators. If pressure continues to build, we likely will see more unstable people inspired to commit extrema actions.

We know that Zegarac is not representative of people who oppose the trucker’s convoy protests. Responsible people don’t label large, identifiable groups based on the actions of outlying individuals. If only we had responsible leadership in Canada right now. Instead, despite every indication that the Truckers for Freedom convoy has been remarkably peaceful and respectful, there has been a concerted effort to try to paint the protesters as hateful and possibly violent due to the appearance of a couple of offensive flags among the crowds.

A common denominator among those who commit hate crimes is that they don’t see their victims as being human. They have convinced themselves of some sort of personal superiority over those they target and often think they are making the world a better place with their sick actions. Most of these kinds of people keep their vile ideologies limited to spewing hatred over the internet or doing late-night, petty acts of vandalism and graffiti. Unfortunately, some of these people can become fully unhinged if they are provoked and inspired. Then they can become dangerous.

There is no denying that the Truckers for Freedom protests have been experiencing a groundswell of support from Canadians. They may not represent a majority of Canadians, but clearly, they represent millions of them. That makes them a distinct group of sorts and efforts should be made by our political leaders and legacy media outlets to at least respect them, even if not agreeing with them. Instead, we have seen nothing but efforts to insult them and defame them.

When Prime Minister Justin Trudeau came out and labelled the protesters as being racists, misogynists, and extremists, he consciously and dangerously went out of his way to single out a group and belittle it. At a time when we are seeing an unprecedented, unified series of protests across the nation, instead of trying to keep the situation calm, respectful, and safe, Trudeau poured gasoline onto the fire. He then went into hiding.

History has shown repeatedly how people on the extreme end of the ideological spectrum, whether right or left, can be incited into dangerous actions due to irresponsible, inflammatory rhetoric from political leadership. We have been lucky to date that Trudeau’s words haven’t appeared to have inspired many extreme actions.

At least, not yet.

The fringe within the Truckers for Freedom convoy may be inspired to get extreme too if the ongoing campaign of vilification against them continues. Tens of thousands of people demonstrated throughout every major city in Canada over the past weekend. There were no riots, no burnings, and no assaults. As these demonstrations continue though, frustrated, unstable individuals may feel compelled to get extreme. How much more demonization do we expect them to take? Any of their actions will of course be attributed to the majority of the demonstrators leading to even more disorder.

It has been incredible how so many people have attended so many protests in such a peaceful way. Wouldn’t it be fantastic if we got through this entire chapter of Canadian history without any major acts of violence and without deaths?

It is clear that the protesters aren’t giving up any time soon. Trudeau doesn’t have to come out and meet them, but he is going to have to start listening to them and treating them with respect. Leaders don’t ridicule and divide their people during periods of crisis. They inspire, unite, and work to deescalate dangerous situations. Let’s all hope Trudeau figures this out before things get ugly.

The dangerous incident in Winnipeg was a warning shot. It should serve as a wake-up call to our political and media leaders that we need to change the tone of our discourse to one of respect and potential compromise.