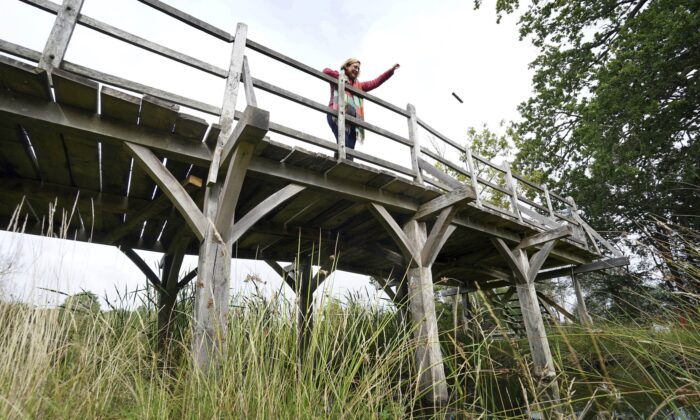 LONDON—An old bridge that inspired “Winnie-the-Pooh” author A.A. Milne and was depicted in his much-loved children’s stories about the honey-loving bear is being sold at auction on Wednesday, with a price estimate of up to around $80,000.

Originally known as Posingford Bridge, it was built in 1907 in Ashdown Forest, in southern England, as a river crossing.

“Christopher Robin played on it as a child in the 1920s with his father, the author A.A. Milne, inventing the game of Poohsticks which provided the inspiration for the subsequent books,” auctioneer Summers Place Auctions said on its site.

“First mentioned in ‘The House at Pooh Corner’ it describes how Pooh accidentally drops a pine cone into a river from a bridge and after watching how it appeared on the other side of the bridge, devises the rules for Poohsticks.”

The bridge, which was illustrated in Milne’s books by E.H Shepard, featured in subsequent stories with characters Christopher Robin, Eeyore, and Tigger also playing the Poohsticks game.

It was restored and reconstructed in 1979 and proved a popular tourist attraction. However, due to deteriorating conditions, the bridge was dismantled and stored away, replaced with a new structure in 1999, according to Summer Place Auctions.