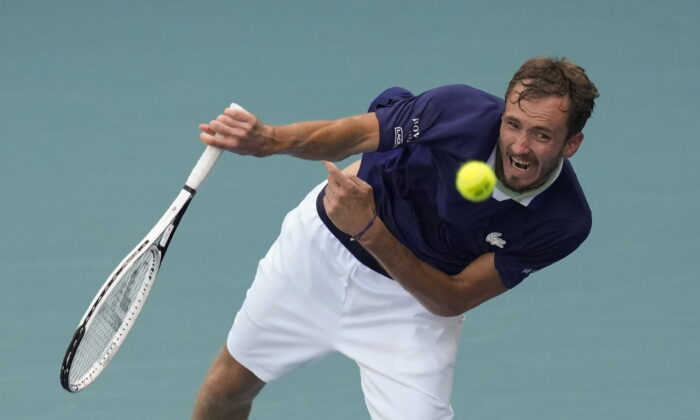 Wimbledon Organizers Ban Russian, Belarusian Players From Competing Due to War in Ukraine

Wimbledon organizers have confirmed they will not allow Russian and Belarusian players to appear at this year’s tournament, citing the ongoing conflict in Ukraine.

In a statement published on April 20 on behalf of the All England Club and the Committee of Management of The Championships, organizers said they “share in the universal condemnation of Russia’s illegal actions,” which they referred to as “unjustified and unprecedented military aggression.”

Organizers said they “carefully considered the situation in the context of our duties to the players, to our community and to the broader UK public as a British sporting institution” and that they have decided it would be “unacceptable for the Russian regime to derive any benefits from the involvement of Russian or Belarusian players with The Championships.”

Organizers said they had also taken into account guidance set out by the UK government specifically in relation to sporting bodies and events when making the decision to ban Russian and Belarusian players from the event.

“Given the profile of The Championships in the United Kingdom and around the world, it is our responsibility to play our part in the widespread efforts of Government, industry, sporting and creative institutions to limit Russia’s global influence through the strongest means possible,” the statement reads.

“It is therefore our intention, with deep regret, to decline entries from Russian and Belarusian players to The Championships 2022,” it added.

Organizers noted, however, that they would consider and “respond accordingly” if “circumstances change materially between now and June,” when Wimbledon is set to start.

The decision came after the UK government had initially discussed the possibility of the All England Club allowing Russian players to take part as long as they signed a document stating they did not support Russian President Vladimir Putin, an idea that was later scrapped.

Elsewhere on Thursday, Russian and Belarusian players were also banned from tournaments this summer by the UK’s Lawn Tennis Association (LTA), which organizes all of the other major summer grass-court tournaments in the country.

LTA acknowledged in a statement that individual Russian and Belarusian players may not support the actions of their governments with regard to Russia’s invasion of neighboring Ukraine and that the situation is “beyond their control.”

“Never-the-less the national governing body believes that it is important to do all it can to support Ukraine at this time, and that this move has the support of the British public,” LTA said in a statement announcing the ban.

Wimbledon organizers said on Thursday that they welcomed LTA’s decision, noting that it serves to ensure that “British tennis is delivering a consistent approach across the summer.”

The latest announcement from Wimbledon means that Russian players such as the No. 2 Daniil Medvedev, U.S. Open defending champion, and the No. 8 ranked Andrey Rublev will not be able to compete in this year’s tournament, which commences on June 27 and runs until July 10.

Russian women’s world No. 15 ranked Anastasia Pavlyuchenkova will also miss out on this year’s event, as will Belarusians Aryna Sabalenka, ranked at No. 4, and Victoria Azarenka, who was once the top-ranked player in the world.

Belarus has been an ally of Moscow in its military invasion of Ukraine, which began on Feb. 24.

The decisions by both Wimbledon and the LTA drew criticism from the Association of Tennis Professionals (ATP), which said the exclusions were unfair and have the potential to “set a damaging precedent for the game.”

“Discrimination based on nationality also constitutes a violation of our agreement with Wimbledon that states that player entry is based solely on ATP Rankings. Any course of action in response to this decision will now be assessed in consultation with our Board and Member councils,” ATP, which has allowed players to compete under a neutral flag, said.

Organizers of the next Grand Slam of the season, the French Open—set to begin in Paris on May 22—have said they will not impose a similar ban excluding Russian and Belarusian players from participating.

However, players from either of the two countries who are competing will not have their country or flags identified.