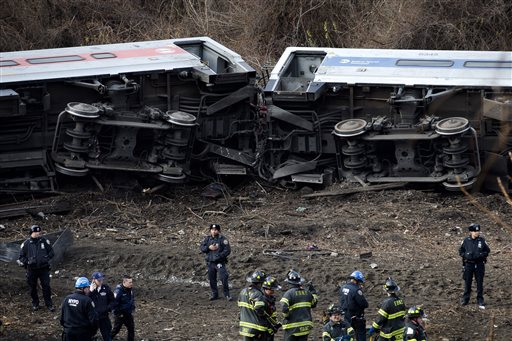 William Rockefeller Jr., an engineer who was operating the Metro North train that derailed in New York on Sunday, told police that the brakes didn’t work.

Rockefeller, 46, told officers that he hit the brakes as the train approached the Spuyten Duyvil station but they didn’t work.

The crash, which happened around 7:20 a.m., killed four and injured more than 60 others. Around 150 passengers were on board.

Rockefeller was among the injured.

Just a day after the crash, Earl Weener, a board member for the NTSB, said their investigation as just beginning and they did not know if it was human error that led to the high speed, or mechanical failure.

“It is premature to blame anyone or anything right now,” Weener said at a press briefing on Monday evening.

The train made nine stops prior to the curve, where the brakes functioned normally.

Metropolitan Transportation Authority Chairman Thomas F. Prendergast said investigators would look at numerous factors, including the train, the track and signal system, the operators and speed.

The speed limit on the curve is 30 mph, compared with 70 mph in the area approaching it.

One passenger, Frank Tatulli, told WABC-TV that the train appeared to be going “a lot faster” than usual as it approached the sharp curve near the Spuyten Duyvil station, which takes its name from a Dutch word for a local waterway, sometimes translated as “Devil’s whirlpool.”

The train was about half full at the time of the crash, rail officials said, with some passengers likely heading to the city for holiday shopping.

Joel Zaritsky was dozing as he traveled to a dental convention.

“I woke up when the car started rolling several times. Then I saw the gravel coming at me, and I heard people screaming,” he said, holding his bloody right hand. “There was smoke everywhere and debris. People were thrown to the other side of the train.”

Nearby residents awoke to a building-shaking boom. Angel Gonzalez was in bed in his high-rise apartment overlooking the rail curve when he heard the roar.

“I thought it was a plane that crashed,” he said.

Rockefeller hasn’t been publicly named as the train operator but was revealed as the operator by law enforcement sources who spoke to the New York Post.

One of the sources confirmed that police are looking into the speed, and also the possible brake issue.

Rockefeller has been working for Metro North for 20 years and has a clean record.

He defended his son.

“He’s one of the better engineers, the most dependable. And he really does like trains,” William Sr. said.