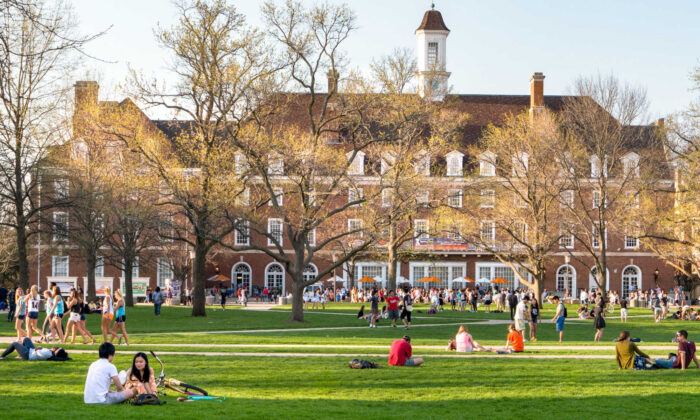 Students on the lawn of a college campus in a file photo. Schools are primary drivers of culture, and it’s hard to overstate the importance of education in the life of a nation and a civilization, writes William Brooks. (Leigh Trail/Shutterstock)
Viewpoints

From Western Traditions to Political Indoctrination: A Cultural History of Education

Part 6: Something needs to be done!

The ancient Greeks used the term “paideia” to describe the impact of education on citizens of the city-state. In “Battle for the American Mind,” Pete Hegseth and David Goodwin assert that “paideia, taught in schools and at home, transfers to the culture in the next generation.”

The late American journalist Andrew Breitbart summed it up when he said, “Politics is downstream from culture.”

Schools are primary drivers of culture, and it’s hard to overstate the importance of education in the life of a nation and a civilization.

The Consequences of Liberal Silence

Over the past 100 years, the Western worldview has moved from Judeo-Christian to classical liberal to Marxist progressive, and finally, to the hyper-divisive neo-Marxist and post-Marxist “woke” zeitgeist that has captured almost all of our formative institutions.

Reversing this cultural race to the bottom will require a tenacious intervention by freedom-loving parents, citizens, and politicians across North America.

The steady advance of the neo-Marxist movement in North America is comparable to a situation that American historian Gertrude Himmelfarb once uncovered in British historiography.

In her book “The New History and the Old,” Himmelfarb asks: Why, in a country so resistant to Marxist socialism, have there been so many influential Marxist historians? Why, in Great Britain, whose unique institutions and traditions were “so notably inhospitable” to Marxism, did historiography become so profoundly influenced by Marxist interpretations? Was this a result of the superior will and tenacity of the Marxists, or just a thoroughgoing indifference on the part of everyone else?

Himmelfarb concludes that the extraordinary impact of Marxism wasn’t an inevitable side effect of democratic capitalism; it was the result of a conscious commitment by a group of dedicated ideologues to impose their influence on Britain’s national history.

Liberal scholars generally remained silent about the expanding influence of Marxism on the grounds that it would be strident or improper to label a historical interpretation as Marxist—rather like making an “ad hominem” argument.

For Himmelfarb, it was neither irrelevant nor ungracious to point out that a philosophical position, public policy, or professional practice might be influenced by Marxist assumptions. In fact, refusing to do so limits the quality of public discourse because it means declining to take seriously what Marxist intellectuals took very seriously themselves.

A similar unwillingness to speak up could explain the meteoric rise of cultural Marxism in North American schools. “Fair and balanced” liberal equivocation almost always favors the strident left.

For decades, policy studies in education have focused on statistically measurable outcomes such as achievement levels in reading, science, and mathematics; graduation rates; availability of special needs programs; education budgets; and public funding.

All of the above are worthy of attention, but none rises to the same level of significance as the battle for minds and the influence of paideia.

Until recently, the progressive paradigm, with its neo-Marxist revisions and woke modifications, has gone largely unchallenged. Parents and politicians conceded control over education to government experts, and any trespass on their jurisdiction was regarded with utmost impatience.

But shying away from contentious issues won’t produce needed educational reform. Avoiding controversy out of a reluctance to appear impolite or disruptive means accepting student political indoctrination and the systemic deceit of the progressive movement.

As the late Charles Krauthammer suggested, people need to identify the “things that matter.” We have a duty to seek a better understanding of what is going on in our schools. It’s up to citizens to ensure that the ideas guiding education are consistent with the values and customs that Western society has tested over centuries.

After some 40 years in the education sector, I couldn’t help concluding that progressive teachers unions care very little for the quality of education and student outcomes.

Independent schools have always been a promising option, but for many they are too expensive and every bit as woke as their public counterparts.

A spreading hostility between schools and parents over radical left curriculum developments, the inappropriate sexualization of children, and unnecessary lockdowns has already led to an explosive growth of grassroots parent advocacy groups across the continent.

Ordinary people see through the perverse mission of the elite left and are beginning to demand that education tax dollars be allocated to the child rather than the school. This would break the monopoly of government schools and provide real choice for families from a wide range of economic circumstances.

In the United States, some suggest there are constitutional obstacles for faith-based schools to receive public money directly in the form of student vouchers. Perhaps that’s why Hegseth and Goodwin recommend the option of universal education tax credits at the state and federal levels.

In Canada, where guarantees for public Catholic and Protestant school systems go back to Confederation, no “separation of religion” principle should present a constitutional hurdle for the consideration of educational voucher programs.

The Need for Cultural Restoration

In the crucial decades ahead, citizens can’t afford to surrender their right to raise important questions about what students are learning in school.

Hegseth and Goodwin believe the most important mission in the war to recapture Western culture is the restoration of classical Christian education from kindergarten to high school graduation. They may well be right.

Others argue that focusing on the restoration of classical liberal education is a more realistic option in the context of an increasingly secular and multi-denominational North American society.

Both classical Christian and classical liberal school reformers face fierce opposition from the left and require a new alliance to move forward. Either option, or some combinations thereof, would be enormously better than the present progressive model that has an iron grip on education policy.

Many dedicated teachers still seek to play a role in the development of a just and productive society. Many remain dedicated to the best interests of their students and their community.

For decades, parents gave failing grades to public education systems while rating their own child’s teacher as excellent. But progressive faculties of education, government consultants, and union leaders radicalize prospective teachers even before they enter a classroom. Critical race theorists teach that Euro-American culture must be destroyed and replaced by a global, multicultural society.

Teachers arrive in schools thoroughly indoctrinated by the same Marxist and neo-Marxist ideologies that have fractured, vulgarized, and impoverished societies for the past 100 years. They become willing political activists for the left, and those who dissent find themselves “persona non grata” in faculty rooms across the continent.

Woke educators are determined to be agents of radical change. They have leaned into a disingenuous social justice curriculum with an urgency that borders on obsession. They deceitfully frame anti-Western narratives as “teaching honest history.”

Common men and women need to become agents of cultural restoration. They need to rediscover the levels of courage and imagination that will be required to win back the hearts and minds of their own children and their fellow citizens.

A failure to act will mean accepting the assisted suicide of the West.

Something needs to be done!