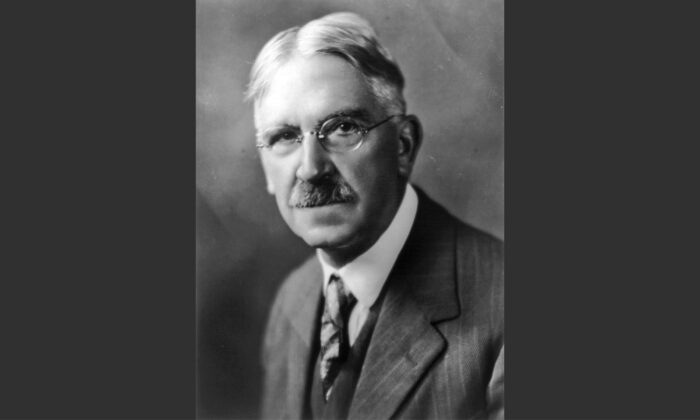 From Western Traditions to Political Indoctrination: A Cultural History of Education

The renowned American philosopher John Dewey led a long and prolific life as a writer, teacher, and political activist.

With the publication of his dual treatise “The School and Society” and “The Child and the Curriculum” in 1899 and 1902, respectively, Dewey launched a grinding assault on the classical traditions of Western education.

Dewey’s major work “Democracy and Education” (1916) had a Promethean effect on educational theory and practice. His progressive education movement established a new orthodoxy, and few theorists have equaled his influence on teachers throughout the world.

In the early 1990s, after some 30 years of experience as a student and a teacher of history, I published an essay titled “Was Dewey a Marxist?” The article remains online on the website of the St. Lawrence Institute for the Advancement of Learning.

The question was intended to be a precursor to doctoral studies at McGill University’s Faculty of Education. I contended that the full extent of Marxist influence on Dewey’s thought is central to understanding the nature of modern education. But almost no one in progressive academic circles was interested in pursuing such an inquiry.

Regardless of academic disinterest, the philosophical origin of progressive education becomes evident to all who care to examine it. Dewey grew up, studied, and taught among intellectuals who were fascinated by the untested ideas of Marxist socialism. He was born in 1859 in Burlington, Vermont. He earned a Bachelor of Arts in philosophy in 1879 from the University of Vermont and taught high school for two years in South Oil City, Pennsylvania.

In 1884, Dewey received his doctorate from Johns Hopkins University with a thesis on “The Psychology of Kant.” At the age of 23, he joined the leftist intellectual scene with the publication of his first article “The Metaphysical Assumptions of Materialism.”

In the decades that followed, Dewey’s career turned to teaching, scholarship, and publication. Much of his work was dedicated to pedagogical theory with special attention to elementary and secondary school education.

On his arrival at Columbia University in 1904, Dewey began to concentrate more on creative work in philosophy, but he always maintained a close connection with the field of education. His ideas were translated into multiple languages and reached educators around the world.

A Lifetime Affection for Socialism

Dewey’s retirement from Columbia in 1930 at the age of 70 didn’t deter him from taking up causes that he felt were important.

He accepted the chairmanship of the Commission of Inquiry Into the Charges Made Against Leon Trotsky in the Moscow Trials of 1937–38, and in 1941, he intervened in the Bertrand Russell case, charging the City College of New York with intentionally depriving the noted British socialist of an opportunity to teach in the United States.

Dewey also made a number of goodwill tours to the Soviet Union. American historian Paul Kengor, in his 2018 book “Dupes: How America’s Adversaries Have Manipulated Progressives for a Century,” describes Dewey as the Kremlin’s favorite educator.

“To Moscow,” Kengor writes, “one of the most important dupes among those boatloads of Americans who came to witness the Soviets’ grand experiment was the renowned John Dewey, a progressive pillar and icon. Dewey—educator, philosopher, professor, reformer—was a liberal’s man for all seasons. His impact on education and philosophy, most notably during his long tenure at Columbia University is difficult to overstate.”

Dewey was an active participant in the international socialist intellectual community until the time of his death at the age of 92 on June 1, 1952.

No Room for ‘Plausible Deniability’

Progressive intellectuals like Dewey engaged in lengthy debates about the ideas of Karl Marx and how best they could be applied to Western society. Intense discussions carried on from the 1880s to the outbreak of World War I, and continued with renewed vigor after the successful Bolshevik coup and the creation of the Soviet Regime in 1917.

Few can deny that Marx was the intellectual Godfather of 20th-century totalitarian communism. His ideas inspired the most disruptive and bloody revolutionary movements in modern history.

Marxist conflagrations crossed national borders, destroying the property and lives of millions around the world, while guileful progressives instinctively disapproved of any connection being made between Dewey and Marx.

Nevertheless, the tone being set in North American schools is now unmistakable. A century of progressive dominance has produced a core school curriculum that is deeply influenced by socialist revolutionary idealism. Various types of Frankfurt School Marxists, cultural Marxists, and woke post-Marxists rail against traditional “power structures” and claim to be liberating young minds from the “prejudiced” thinking of “fascist” forefathers.

Kengor ranks high among scholars who challenge Marxist deceptions. In his book “Dupes,” he notes that the conservative publication “Human Events” placed Dewey’s “Democracy and Education” at No. 5 on its list of the Ten Most Harmful Books of the 19th and 20th Centuries—trailing only “The Communist Manifesto,” “Mein Kampf,” “Quotations from Chairman Mao,” and “The Kinsey Report.”

Kengor points out that many critics hold Dewey responsible for the catastrophic decline of education in the United States and the West.

“Professor Henry Edmondson III, an expert on education, contended that the degree to which American education is unsound is largely attributable to the influence of Dewey,” he writes.

Kengor also referenced Georgetown University professor George W. Carey, who writes, “We cannot come close to understanding why our public education is in such a wretched state without examining John Dewey’s philosophy.” The Georgetown scholar deeply regretted that the degenerative effects of “Deweyism” continue to thrive in faculties of education across his country.

Nevertheless, among our pedagogical “wokerati,” respect for the legacy of Dewey and his disciples still borders on spiritual reverence. Daring to attribute the thought of Dewey to Marx is tantamount to heresy.

Suffice it to say, there’s no room for “plausible deniability” about the link between these socialist philosophers. We’ll examine this more closely in Part 5 of this series on the cultural history of education.