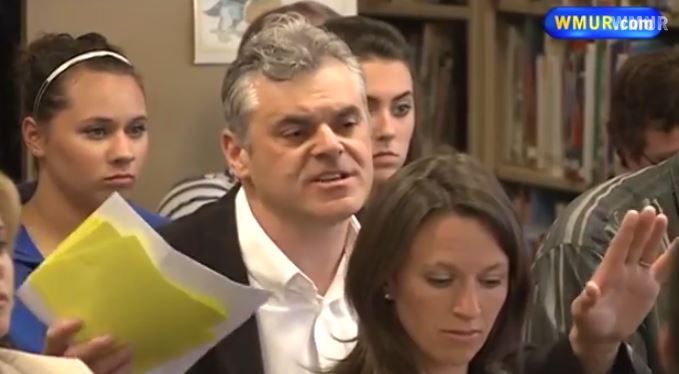 William Baer, a lawyer in New Hampshire, was arrested after questioning school officials in a meeting about a book students–including his daughter–have been reading that includes a graphic description of a sexual encounter.

“I was shocked when I read the passage, and not much shocks me anymore,” Baer told EagNews. “My wife was stunned by the increasingly graphic nature of the sexual content of the scene and the imagery it evoked.”

The book is required reading in honor’s English.

Baer, who was arrested and charged with disorderly conduct, told WMUR-TV that he believes what happened was a violation of his First Amendment rights. And it was insulting.

“It was basically, you make a statement, say what you want and sit down,” he said. “Sit down and shut up, basically, and that’s not how you interact with adults.”

“He spoke out of order,” said Lt. James Leach. “Someone else was given the floor and was speaking. He interrupted them and continued after being asked to stop. He was then asked to leave and refused to leave unless he was arrested, so he was arrested.”

Baer plans to fight his arrest, which could end up leaving him with a $1,200 fine.

Other parents are also upset over the book, and how they weren’t made aware of it until their kids already had a copy.

“I am utterly appalled that this was an oversight, that my son had this book in his hand for a week. (It’s) unacceptable,” Sarah Carrigan told WCVB.

Barbara Baer agrees with her husband.

“I fully understand how he feels. It really is a huge violation,” she said. “Why should those ideas be put in their mind. They can discuss this some other way. They don’t need that kind of imagery.”

School officials haven’t said anything about the book such as whether they’ll consider replacing it.