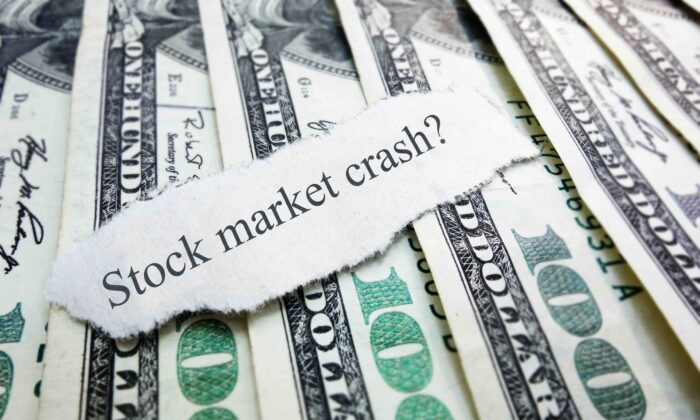 Will the Stock Market Crash? Part 2 of 2

In my last column (“Will the Stock Market Crash? Part 1 of 2”), I answered this question in the affirmative, on the grounds that the market was the second most overvalued in history according to Shiller’s CAPE Index, and it had the highest level of margin debt since the Great Depression. Both conditions set the market up for crashes in the past.

So far this year, the market has fallen by just under 10 percent from its peak, and it’s now back to where it was in the middle of 2021—though it’s recovered slightly from its low before the Ukraine War began.

Left to its own devices, the market would continue to crash. Even the 10 percent fall—before the war rally—leaves the market close to twice its long-term value on Shiller’s CAPE Index. Margin calls should be weighing on the market too, with margin debt at its highest level, relative to GDP, in over 90 years.

But the market hasn’t been left to its own devices, ever since Greenspan’s once famous but now largely forgotten “whatever it takes” intervention after the biggest one-day fall on Wall Street ever, the crash of Oct. 19, 1987, when the SP500 fell 20 percent in a single day. Greenspan’s promise to supply enough liquidity to the market to prevent a meltdown became known as the “Greenspan Put.”

But as effective as Greenspan’s underwriting of the market was, it was fleeting. The permanent support of the market by The Fed began under Bernanke, with what is called “quantitative easing,” or QE for short. With QE, The Fed buys bonds off the finance sector, with the objective of encouraging financial companies to make loans, and to buy other assets—especially shares.

The Fed approved QE at the end of 2008, during the “Great Recession” and after the market had plunged by over 50 percent from its peak. Since then, the market has risen sevenfold in 12 years—growing far faster than the economy.

Unfortunately, it can keep on growing because of QE. The Fed’s position in the financial system gives it effectively limitless power to buy financial assets.

As I’ve explained in earlier columns, when the government runs a deficit—when it spends more than it takes back in taxes—then it creates both money for the non-bank public, and Reserves for the banking system. When the government sells bonds to the banks, the banks buy them with those additional Reserves. So a deficit of a billion dollars, for example, creates $1 billion in new money in the public’s deposit accounts, and $1 billion in Treasury Bonds for the banks.

QE reverses these processes to some extent, but its effect is very different on ordinary banks and shadow banks.

Ben Bernanke thought this would result in banks making more loans: “The idea behind quantitative easing is to provide banks with substantial excess liquidity in the hope that they will choose to use some part of that liquidity to make loans or buy other assets,” he wrote in 2009. That is a fallacy, as the Bank of England pointed out five years later: banks do not lend reserves. This side of QE remained a damp squib: much was expected, but very little happened, because the theory behind QE for banks was simply wrong.

But things are very different for QE with Shadow Banks. That actually increases the money supply by $300 billion, but that is money circulating just on Wall Street—not Main Street. The sale adds $300 billion to the deposit accounts of the Shadow Banks, which creates money that can legally only be used to buy other financial assets.

That’s how QE causes inflated asset prices. Though they are far less regulated than actual banks, Shadow Banks can’t just go shopping—they have to buy financial assets with any money they receive, whether from the government or the non-bank public. With The Fed buying up not just Treasury Bonds, but “Mortgage Back Securities” (MBS) as well, and even “Junk Bonds” issued by Shadow Banks, the share market is “the only show in town” for the additional money created by QE.

QE thus puts additional buying pressure on the share market, helping drive up share prices well beyond what would be justified by the “fundamentals.” This pressure can be applied forever, because QE doesn’t deplete any fixed “barrel of money” at The Fed: instead, it increases The Fed’s Assets (Treasury Bonds) as much as it increases its Liabilities (Reserves). There is therefore no limit to QE from The Fed’s point of view, and precious little limit from the Shadow Banks as well, since they can create Mortgage Backed Securities, sell them to The Fed, and come back for more.

This keeps inflating asset prices, despite the extreme overbought level share prices have reached. Since The Fed also appears motivated to keep share prices rising, I can see a future where stock market crashes motivate yet more QE, stopping the crash and once more pushing the market upwards.

As the saying goes on Wall Street, “don’t fight The Fed.” But somebody should.