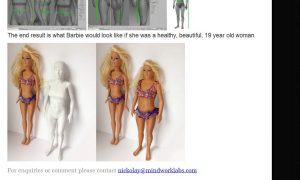 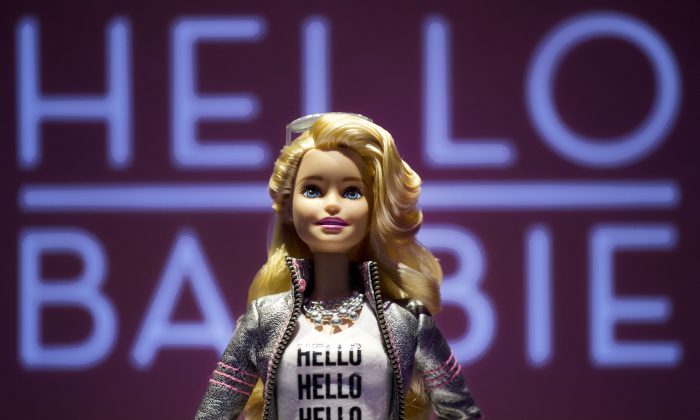 Hello Barbie is displayed at the Mattel showroom at the North American International Toy Fair, Saturday, Feb. 14, 2015 in New York. Mattel, in partnership with San Francisco startup ToyTalk, will release the Internet-connected version of the doll that has real conversations with kids in late 2015. (AP Photo/Mark Lennihan)
Business

Will Smart Barbie Save or Kill Mattel?

With flashing lights and a pumping disco song the newest version of toy maker Mattel’s flagship product, Barbie, is taking the tiny spotlight—it’s Hello Barbie, a toy so smart it can imitate actual conversation.

“The number one request we receive from girls globally is to have a conversation with Barbie, and with Hello Barbie we are making that request a reality,” stated Stephanie Cota, Mattel’s senior vice president of global communications, via email.

The new Barbie connects to Wi-Fi and sends what you tell her to ToyTalk, a voice recognition company. ToyTalk analyzes the recording and picks a suitable pre-scripted line, sends it back to Barbie and voila! Barbie talks.

The doll also asks you questions about what you like or what you want to be when you grow up. ToyTalk remembers the answers and features your likes in Barbie’s responses.

Just like a real friend she can respond to the things that she’s learned about me.
— Mattel spokeswoman

“Just like a real friend she can respond to the things that she’s learned about me,” Mattel spokesperson said at the doll’s introduction last month at the New York Toy Fair.

For over 50 years Mattel has been a leader in the toy market. It’s betting its success on its ability to revamp their toys and come up with innovative new ones spending over $200 million a year on product development, according to its annual report with the Securities and Exchange Commission.

Its brushes with technology have not always been successful. In 1983 the company almost went under after a failed video game bid.

Hello Barbie, in a way, returns Mattel to its roots, reminding of the acclaim brought by its pull-a-string talking “Chatty Cathy” doll in 1965.

With over $700 million in advertising budget, Cathy’s hi-tech embodiment in Hello Barbie will be propelled to unmistakable recognition around the world. But even that may not be enough to sidestep a lurking death trap–privacy concerns.

What’s the big deal? We’ve had talking dolls before, haven’t we?

“Mattel has always been at the forefront of inspiring conversations between girls and their dolls,” Mattel’s Cota stated. Chatty Cathy is a proof of that.

But Hello Barbie not only talks, she records, sends to third parties, and keeps data in cloud storage on the Internet.

But Hello Barbie not only talks, she records, sends to third parties, and keeps data in cloud storage on the Internet.

That may be one step too far.

To be sure, both Mattel and ToyTalk state they adhere to children’s privacy laws and will only use the recorded conversations to “operate and improve” their products.

Also, as opposed to Smart TV that listens to everything, Hello Barbie only listens when a button is pushed, like a walkie-talkie.

But InBloom also made promises of privacy and security. Apparently, too many parents just didn’t trust it enough.

The concern is indeed about Mattel mining the data to learn children’s likes and dislikes and craft products and advertising accordingly.

“Kids using Hello Barbie aren’t only talking to a doll, they are talking directly to a toy conglomerate whose only interest in them is financial,” said Dr. Susan Linn, Harvard psychologist and executive director of Campaign for Commercial-Free Childhood in a statement.

Children under 6 wouldn’t necessarily understand what is appropriate to share with such a doll.

Moreover, children under 6 wouldn’t necessarily understand what is appropriate to share with such a doll, according to Dr. Yalda Uhls, child psychology researcher with the University of California in Los Angeles.

“[T]his gives me concern that children would share information about their families with the doll that then [Mattel] would have access to,” Uhls stated in an email. “[I]t’s a means to use the child to learn consumer patterns, for everyone in the family.”

ToyTalk gives parents a choice to access the recorded files and delete them. However, by then the files would have already been analyzed for usable content.

This is the big question for Mattel and consumers: Will parents entrust Mattel with their children’s secrets while paying $74.99 for a doll? We’ll see the upcoming holiday season.