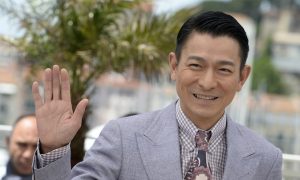 Taylor Swift might have unwittingly stumbled into politically fraught territory in China with her latest business venture: the singer-songwriter intends to bring to the country her line of branded clothing and merchandise that features the slogan: “T.S. 1989.”

The clothing line has a targeted August launch, in cooperation with the e-commerce giant JD.com. Images available so far indicate that the Chinese line will carry “1989” emblazoned on T-shirts, dresses, and accessories—whether the initials will precede the year is unclear.

The date “1989” refers to Swift’s latest album, her upcoming live tour, and her birth year.

And to the millions of Chinese who spot the slogan, it will immediately call to mind the Tiananmen Square massacre.

Hundreds of students advocating democratic reform were killed when troops opened fire on them on orders of hard-line Chinese Communist Party elders.

Following the slaughter, Party leaders sought to wipe Tiananmen from the nation’s collective memory by suppressing and censoring all references to the traumatic event, and by harassing and imprisoning those who publicly discussed it. As a result, old and young Chinese citizen alike are strongly averse to talking about what happened in 1989; many young Chinese aren’t even aware of the cause of the protests or the extent of the killing.

Today, the Chinese regime remains extremely sensitive to all references to Tiananmen Square behind the Great Firewall. Censors will remove combinations of the numbers “89,” “6,” and “4”—the protest’s year and date—on Chinese social media sites. Chinese netizens have gotten around the numbers by posting coded substitutes like “May 35.”

It is unclear if Swift is aware of the connection between her clothing line and tour, and Tiananmen Square. Messages to her official Twitter account and publicist were unanswered at the time of writing.

Musicians and celebrities have been known to run afoul of the Chinese regime. Saxophonist Kenny G deleted a picture of himself at an Occupy protests site in Hong Kong during the height of the pro-democracy Umbrella Movement in October last year. Chinese media too carried reports that Hollywood and Hong Kong movie star Chow Yun-fat and other Hong Kong celebrities who voiced support for the movement had their commercial prospects on the mainland reduced, according to Radio France Internationale.