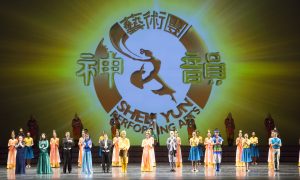 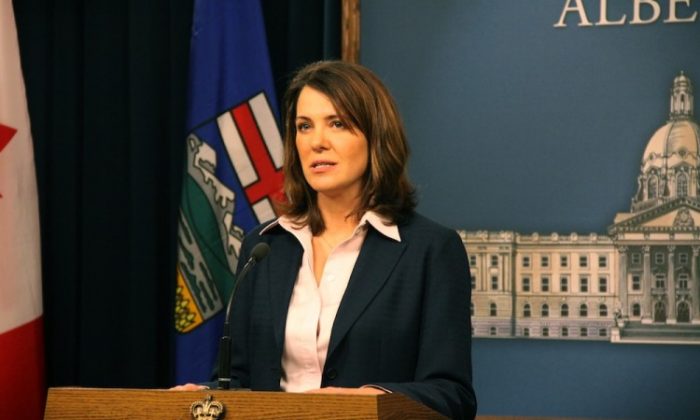 In their first session as the official opposition, the Wildrose Party took the Tories to task in the Alberta legislature Monday, calling the cancellation of future Shen Yun Performing Arts shows in the province an act of “bullying.”

Shen Yun, a New York-based classical Chinese dance company that performs around the world each year, has been coming to Alberta since 2007. The group was slated to perform at both the Northern and Southern Alberta Jubilee auditoria in 2013.

However, Culture Minister Heather Klimchuk abruptly cancelled future performances at both venues after the local presenters went public with concerns of “professional misconduct” at the Southern Alberta Jubilee Auditorium in Calgary.

“It’s another classic example of ‘keep your mouth shut, otherwise we’re going to punish you.’ … This is not setting the proper tone for a brand new government,” said Wildrose leader Danielle Smith at a press conference on Monday.

Culture Critic Blake Pederson called on Klimchuk in Parliament on Monday to apologize to the Falun Dafa Association, which presents Shen Yun in both cities, and reinstate the 2013 shows.

“The culture minister’s rash cancellation of next year’s performances means Shen Yun will have no venue large enough to accommodate it and effectively bans Shen Yun’s world class performances from Alberta,” said Blake.

In response, Klimchuk called the dispute a “contractual issue” and a “safety issue”—referring to a safety net placed over the Shen Yun orchestra pit that was demanded by Southern Alberta Jubilee management.

There was no net installed at the Northern Alberta venue, however, despite Klimchuk’s assertions of its critical need. The net was also not mentioned in the contract between the Calgary venue and organizers.

Klimchuk said she will ask her officials to meet with the Calgary Falun Dafa Association to see whether the issue can be resolved. Premier Alison Redford echoed Klimchuk’s stance.

“This is an issue with respect to whether or not netting should be up around a stage and the management of the auditoriums believe that to be the case. … That is the primary concern and it is the only issue that it is going on,” Redford said.

The Calgary Falun Dafa Association cried foul at a press conference after the legislative session, saying the safety claims were a red herring—an attempt to distract the public from the Minister’s mistreatment and censorship of the group.

“We are disappointed that the minister has been mis-portraying that this is an issue solely about safety and a contractual issue, making the suggestion that the government is pro safety and our organization is weak in regards to safety. That’s really untrue. We are talking about professionals who are trained in the highest form of their art and certainly safety at all the performances is an important part of their work,” said spokesperson Jenny Yang.

“Unfortunately the minister’s office and the auditoria have been completely unwilling to discuss any remedies, and are rather disrespectful in that process. … It is that behaviour and that attitude which is not isolated to the net but has become the norm of how the ministry and the auditoria management are dealing with Shen Yun.”

Yang said the problems at the Southern Alberta Jubilee Auditorium started in 2010 and reached a peak in 2012 when a technical mistake by Jubilee staff caused a major lighting error during the performance. In addition, the door to a makeshift change room for Shen Yun’s female performers was accidentally opened by a male staff member, exposing the young women to other male staff as they disrobed.

Yang says when these concerns were raised with Jubilee staff they were met with dismissal, condescension, and laughter.

According to Smith, it was clear upon reading the letter of cancellation Klimchuk wrote to the Calgary presenters that safety was not the real issue.

“It wasn’t safety issues that caused [the government] to cancel this concert—they were upset that this group went public with the fact that this government refused to actually address their concerns,” she said.

The Falun Dafa Associations of Calgary and Edmonton have raised concerns that the cancellation of the 2013 shows is a result of pressure from the Chinese Communist regime ahead of Redford’s trip to China next month.

The regime has repeatedly tried to stop Shen Yun from performing in Alberta and at many other venues around the world due to the group’s mission to revive traditional Chinese culture, which has been systematically decimated in China to make way for communist rhetoric.

In 2010, the Southern Alberta Jubilee management told the local presenters that they had indeed received letters and phone calls, presumably from the Chinese consulate, that were clearly meant to create animosity toward the hosting organization with the ultimate aim of cancelling the shows.

Yang says the Falun Dafa Association’s original demands were simply to have the net removed from the orchestra, as it was never part of their contractual agreement, and to ask for improved relations at the Southern Alberta venue.

Now they are calling on Premier Redford and Minister Klimchuk to reinstate the 2013 shows, work with the presenters to resolve concerns, and reject any interference from the Chinese regime.