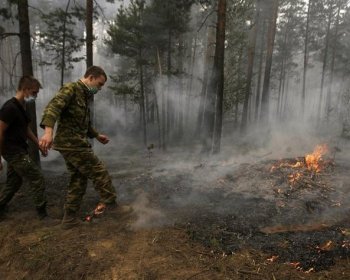 Russian soldiers kick dirt on a forest fire some 130 kilometers from Moscow in Beloomut on August 1. Firefighters fought an uphill battle the fires that have already killed 30 people, destroyed thousands of homes and mobilized hundreds of thousands of emergency workers. (Artyom Korotayev/Getty Images )
Europe

The Russian Ministry for Regional Development said Sunday that more than 771 wildfires had been registered in the central and western part of the country as of Sunday morning. Officials say 1,875 homes have been destroyed leaving over 2,000 people homeless, according to RIA.

Unusually high temperatures, hitting 95 degrees Fahrenheit some days over the past five weeks, and drought, have caused the fires in forests and peat bogs.

The coming week promises no respite from the heat. Temperatures are predicted to reach 100 degrees Fahrenheit in Moscow on Monday and Thursday, staying in the upper nineties Tuesday and Wednesday, and reaching 104 degrees Friday, according to Weather Underground.