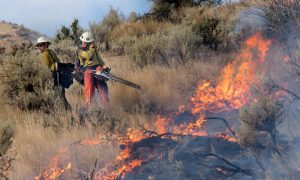 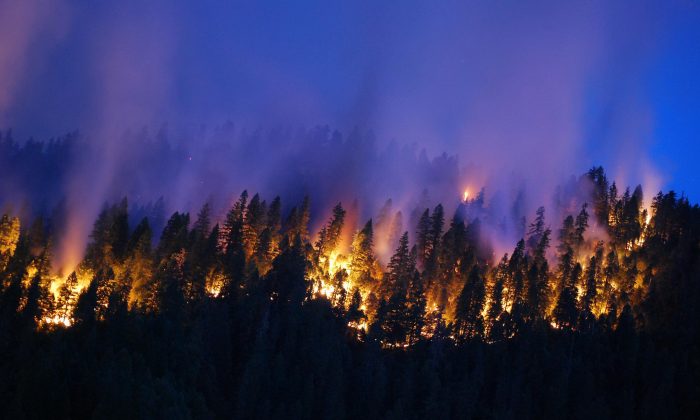 "Projections of more wildfires in the West mean that we need to account for this source of carbon emissions. Meeting the state greenhouse gas targets for 2020 might require a reconsideration of wildland management policies," says John Battles. (US Department of Agriculture/CC BY 2.0)
Environment

Wildfires in California emit more greenhouse gas than previously believed, according to a new study that quantifies the amount of carbon stored and released through the state’s forests and wildlands.

The findings could have implications for the state’s efforts to meet goals mandated by the Global Warming Solutions Act, or AB 32, to reduce greenhouse gas emissions to 1990 levels by the year 2020. The bill, which passed in 2006, assumed no net emissions for wildland ecosystems by 2020.

The information available at the time the bill was passed may have underestimated the release of carbon through landmass conversions and wildfires, which are projected to increase in intensity in the western United States due to climate change, researchers say.

California is one of the few jurisdictions in the world to set mandatory greenhouse gas emissions targets.

“Determining the balance between carbon storage and emissions is essential for tracking the role of ecosystems in climate change,” says lead author Patrick Gonzalez, a climate change scientist with the National Park Service.

Gonzalez worked with forest ecologist John Battles, a professor of environmental science, policy and management at the University of California, Berkeley, and the principal investigator on the project to quantify carbon storage and emissions in the state’s wildlands.

For the study, published in the journal Forest Ecology and Management, researchers used 2001-2010 data from multiple public sources, including plot-level carbon stocks from the US Department of Agriculture’s Forest Inventory and Assessment Program and US Landfire remote sensing data of vegetation at a 30-meter spatial resolution.

The analysis confirmed that California’s forests are huge carbon reservoirs for the state. Previous research has found that redwood forests near Redwood National Park contain the most carbon per hectare on the ground of any ecosystem in the world.

One hectare of redwood forest can store an amount of carbon equivalent to the annual greenhouse gas emissions generated by more than 500 Americans. The giant sequoia forests of Sequoia and Kings Canyon National parks come in second.

Annual carbon losses from forests and wildlands in California represent as much as 5 to 7 percent of state carbon emissions from all sectors between 2001 and 2010.

“National parks and other protected areas clearly provide an important function in removing carbon from the atmosphere and storing it,” Battles says. “But we also know from previous research that a century of fire suppression has contributed to a potentially unsustainable buildup of vegetation.

“This buildup provides abundant fuel for fires that contribute to carbon emissions. Projections of more wildfires in the West mean that we need to account for this source of carbon emissions. Meeting the state greenhouse gas targets for 2020 might require a reconsideration of wildland management policies.”

Researchers from the US Forest Service, the Spatial Informatics Group in Pleasanton, California, and the University of San Francisco are coauthors of the study.

The California Air Resources Board funded the work.