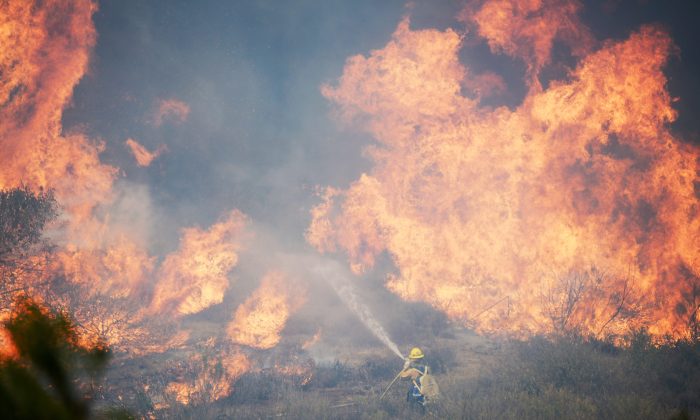 A file photo of a U.S. Forestry Service fire fighter fighting a wall of fire during an out of control wildfire in Camarillo, Calif., on May 2, 2013. Wildfire season is getting longer and the demand for people willing to take on the dangerous job of firefighting may grow as the climate changes. (Kevork Djansezian/Getty Images)
US

Wildfire Fighting: ‘A Little Bit of an Appetite for Danger’ (+Video)

Wildfires are becoming more common and doing more damage in the United States. The Western fire season is already 78 days longer, on average, than in the 1980s, according to a 2012  United States Department of Agriculture (USDA) Forest Service report. The number of acres burned each year has doubled since the 1960s.

Fires of record-breaking size have blazed in multiple states over the past decade. “With the changing climate, fire seasons will likely become longer and more severe,” states the USDA report. The USDA highlights the need for airtankers. As the fires increased, the number of airtankers decreased from 43 in 2000 to 11 in 2011. The average age of airtankers in the Forest Service fleet is more than 50 years.

The USDA notes that airtankers work in concert with ground forces, not independently. It’s hard work on the ground battling a fire on such a massive scale, trying to direct it, using dirt to extinguish parts of it while digging ditches, among other methods.

“They are folks that have a little bit of an appetite for danger,” said Tom Sheppard, superintendent of the Prineville Interagency Hotshot Crew that battled the South Canyon fire in Colorado in 1994, losing 14 crew members. Sheppard spoke, along with other firefighters involved in the incident, in a 2012 documentary titled Wildland Firefighting: Everyone Goes Home.

The crew was dispatched to what seemed a small, benign, routine fire near Storm King Mountain in Colorado on July 6, 1994. There was a spot-fire on the ridge line between the crew and their safety zone, recalled foreman Bryan Scholz.

A fire that had been burning below the 12-foot canopy of the vegetation exploded to the surface.

Chaos ensued and it was “every man for himself,” said firefighter Bill Baker. The only place to run was down into the eastern canyon—against all training. Descending into a canyon on fire is exactly what they had been trained not to do, but when faced with walls of flame in all other directions, there was no debate, no stopping to talk it over.

Lightley and Scholz talked of frustration with their crew mates who were running too slowly or falling and needed to be picked up. They felt the urgent need to move fast.

Then, Scholz told the crew to pull their shelters out—a last resort. Lightley choked on the words as she recalled it. She had been trained copious times on pulling her shelter, but having to actually do it—“That’s the first time that I thought we might not make it.”

Scholz said of Lightley, “It was like she had seen something the rest of us did not see.” He hit her hardhat trying to jolt her to action, and told her “Get mad!” A crew mate helped her pull her shelter.

They got word that a gully was clear of fire all the way to the highway—a window of escape and hope they knew could close at any moment.

Most of them got clear; 14 did not. There were five women on the crew and four of them died, said Lightley with tears for her fellow female companions with whom she had a special bond. She had known some of them since high school.

Scholz recalls hearing a radio transmission: “Do we need an ambulance?”

Firefighters tell their story of the South Canyon wildfire tragedy in Colorado, 1994, in the 2012 documentary Wildland Firefighting: Everyone Goes Home.