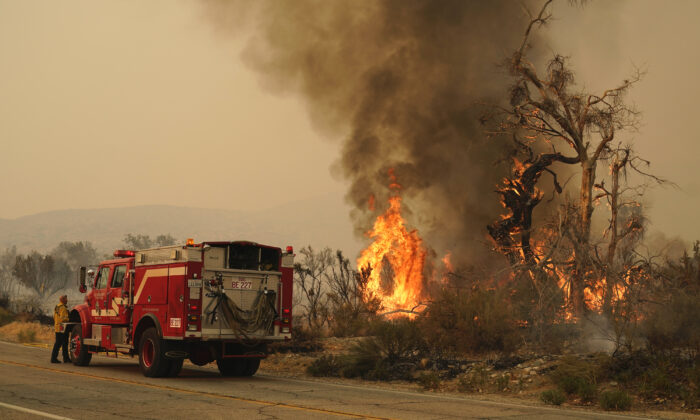 Firefighters continued Sep. 1 to battle a wildfire that has spread over more than 4,200 acres northwest of Tecate, Mexico, destroying four structures—including at least one home—and injuring three people, two critically.

The blaze, named the Border 32 Fire, was only about 5 percent contained as of 10 a.m. Thursday, according to Cal Fire.

The fire erupted about 2 p.m. Aug. 31 off Barrett Lake Road, near state Route 94 in the Barrett Junction area, roughly three miles north of the U.S.-Mexico border. The cause of the fire is still under investigation.

As ground and airborne crews worked to subdue the fast-moving blaze, deputies evacuated residents in the areas of Barrett Smith and Round Potrero roads, and emergency crews shut down a stretch of SR-94 between Forrest Gate Road in Campo and Otay Lakes Road in Dulzura, according to the sheriff’s officials.

Tecate Port of Entry also was closed due to the fire, U.S. Customs and Border Protection reported.

Two men suffered severe burns as the conflagration spread, Cal Fire Capt. Thomas Shoots said. Paramedics airlifted them to the University of California–San Diego Medical Center. A firefighter sustained minor injuries and was treated at the scene before being released to continue battling the flames.

Some 400 homes were under evacuation orders as of early Wednesday evening, by which time the blaze had grown to roughly 1,600 acres. Temporary shelters for the displaced were operating at Jamul Casino and Mountain Empire High School in Pine Valley.

By late Wednesday night, the blaze had charred an estimated 4,243 acres. The burn area was believed to have grown since then, though crews had slowed its spread considerably overnight.

However, the blaze was still actively burning, and the weather—including triple-digit heat, high winds, and low humidity levels forecast for Thursday—kept the danger of renewed serious flare-ups high, he said.

Around 300 firefighters were battling the flames, using about four air tankers and six helicopters, officials said.

Schools in the Mountain Empire Unified and Jamul-Dulzura Union school districts were closed for the day Thursday due to the blaze, and a smoke advisory was in effect for the community of Dulzura.

There are 12 active wildfires in California, the biggest being the Route Fire in Castaic spreading 5208 acres, and 12 percent contained as of Sep. 1. Following that is the Border 32 Fire in Tecate.