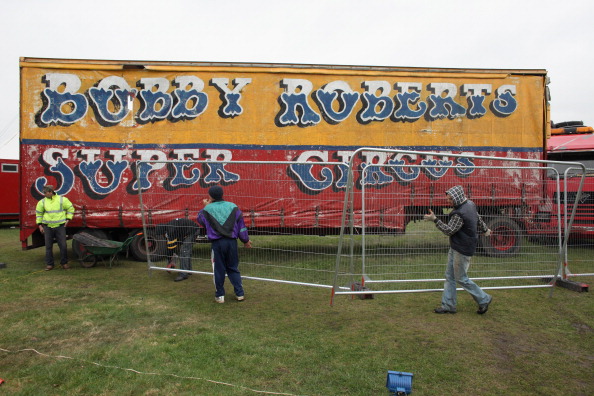 Workers at Bobby Roberts Circus erect a security fence around the big top on Knutsford Common in England on March 30, 2011. Bobby Roberts Circus had to erect a security fence around its giant tent for the first time in its history in the wake of a video showing Anne, one of its retired elephants, being abused. (Christopher Furlong/Getty Images)
UK

Wild Animals to Be Banned From Circuses in England by 2020

The UK government has revealed that wild animals in England will be banned from circuses within two years.

The move comes after a lengthy campaign by animal welfare advocates to outlaw the practice, according to the Independent. It was quietly announced on the Environment Department’s website on Monday, Feb. 26.

“The Government intends to ensure a legislative ban on the use of wild animals in traveling circuses is in place by the time the Regulations expire in January 2020,” a post-implementation review update to The Welfare of Wild Animals in Travelling Circuses (England) Regulations 2012 said.

According to the Daily Mail, the ban means Britan will fall in line with other countries such as Scotland, which implemented the ban last year, and Wales, which is set to introduce one soon.

Animal activists have been accusing circuses of beating, starving, and keeping their animals in squalid conditions for some time already.

“Having campaigned to stop circus suffering around the world for over 20 years, we’re delighted that a ban is finally imminent,” she told the Independent. “Circuses cannot meet the needs of animals in small, mobile accommodation and ADI has repeatedly documented suffering and abuse. We congratulate the UK Government on consigning this outdated act to the past where it belongs.”

Currently, only two circuses in the UK operate with wild animal licenses: the Circus Mondao and Peter Jolly’s Circus, according to the Independent.

Between the two circuses, they own 19 wild animals: six reindeer, four zebras, three camels, three raccoons, a fox, a macaw, and a zebu.

Public opinion in the UK has increasingly turned against the use of wild animals.

The case of Anne—Britains last circus elephant—helped prompt a wide call for a ban, after it was revealed she got beaten during her time at the Bobby Roberts Super Circus, the Daily Mail reported.

The largest animal welfare charity in the UK, the RSPCA, has also welcomed the government’s decision.

“The news that the Government has said there will be no wild animals in circuses in England after the 2019 season or earlier is very welcome and comes as a huge relief,” RSPCA public affairs chief David Bowles said, according to The Mirror. “It’s been a long time coming.”

“This announcement gives circuses a clear two-year warning that no more licenses will be issued and after that, there will be a ban on wild animals in circuses.”