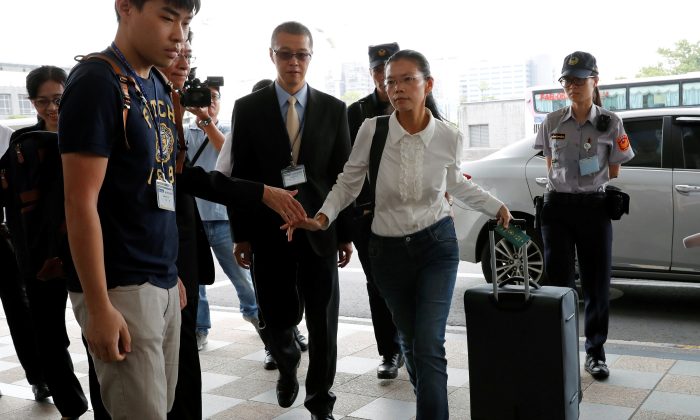 Lee Ching-yu, wife of Taiwan human rights advocate Lee Ming-che, also known as Li Ming-Che, who has been detained in China, departs for her husband's trial from the airport in Taipei, Taiwan on September 10, 2017. (REUTERS/Tyrone Siu)
China

Wife of Detained Taiwan Activist to Attend His Trial in China

TAIPEI—The wife and mother of detained Taiwanese rights activist Lee Ming-che were due to arrive in China on Sunday to attend his subversion trial on Monday, Taiwan’s Mainland Affairs Council said in a statement, calling for Lee’s safe return home.

Lee, a community college teacher and pro-democracy and human rights activist, went missing during a March visit to China. Authorities later confirmed he had been detained, straining already-tense ties between the mainland and the self-ruling island.

Authorities at the Intermediate People’s Court of Yueyang city, in the central province of Hunan, said Monday’s trial on suspicion of subversion of state power would be an open hearing.

However, rights activists say that in sensitive cases, holding “open” hearings is a tool for authorities to demonstrate state power and that usually the defendant has agreed to an outcome.

On Saturday, Lee’s wife, Lee Ching-yu, asked during a news conference that supporters forgive her husband if he says something in court which disappoints them, as he might be required to give testimony against his own free will.

On Sunday she declined to comment to a large media contingent as she checked into her flight at Taipei Songshan Airport, where she was to fly to Changsha, in Hunan province, via Shanghai.

Taiwan’s Mainland Affairs Council said it would do everything in its power to facilitate Lee’s safe return.

“Our government’s approach to this case has been predicated on preserving our country’s dignity while ensuring Lee Ming-che’s safety,” it said.

Beijing regards the island as a breakaway province and it has never renounced the use of force to bring it back under mainland control.