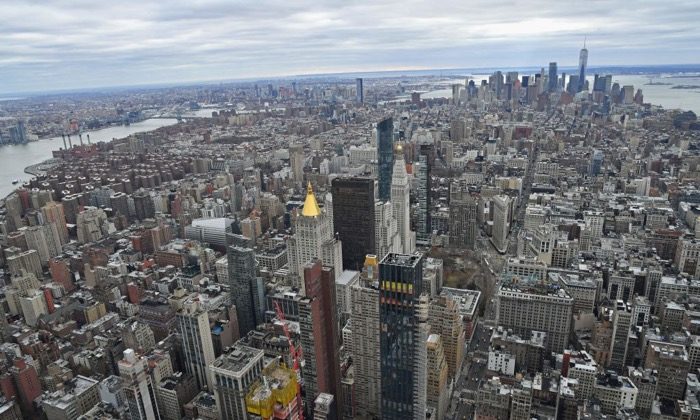 View of Manhattan from The Empire State Building in on Nov. 27, 2018 in New York City. (Angela Weiss/AFP/Getty Images)
US News

NEW YORK—Widespread power outages were reported in parts of New York City’s Manhattan borough on Saturday evening, with subway stations affected and street lights out on part of the Upper West Side, according to social media reports.

The city’s subway system said it was receiving reports of power outages in station complexes on “multiple lines” throughout Manhattan. “We’re working to identify causes and keep trains moving. More information to come,” it posted on Twitter.

It later posted to Twitter that the Midtown and Upper West Side areas had been affected by the power outage and for people to “avoid below-ground subway stations.”

Update: We are working with Con Edison to determine the root cause of the ongoing power failure, which is affecting Midtown and the Upper West Side.

Several stations are currently without power and are being bypassed by all trains. Please stay tuned here for updates. pic.twitter.com/UoHv6RKVyl

Shortly before 8 p.m local time., an update said that local trains were running on the 1/2/3 lines.

Update: The 1/2/3 trains are running on the local track in Manhattan.

As soon as we have more information about service on other lines in Manhattan, we will let you know.

Utility company Con Edison confirmed just after 8 p.m. that it was working to restore power for 42,000 customers mostly on the Westside of Manhattan.

We are working to restore power to 42,000 customers primarily in the Westside of Manhattan. We will provide updates as we receive them. Thank you.

Photos on social media showed traffic lights and train stations blacked out, including at Times square.