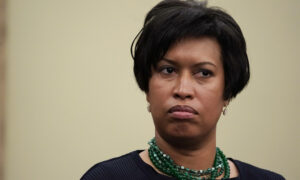 Washington to Remain Under Stay-at-Home Order for Another 3 Weeks, Says Mayor
0 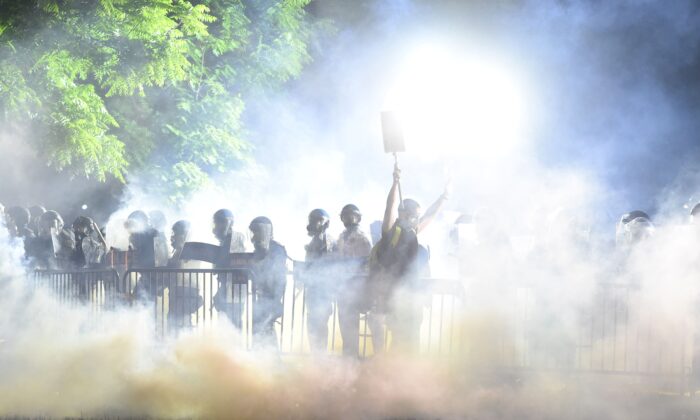 Smoke rises around a protester holding up their hands in front of a row of police during a demonstration against the death of George Floyd at a park near the White House in Washington on May 31, 2020. (Roberto Schmidt/AFP via Getty Images)
US News

Widespread Fires in Washington After Protests Devolve into Chaos

Chaotic scenes of violence and widespread fires engulfed Washington on Sunday as protesters took to the streets for a third consecutive night following the death of George Floyd.

On Sunday evening, Mayor Muriel Bowser announced on Twitter that she was imposing a citywide curfew from 11 p.m. to 6 a.m. on Monday in an effort to stem the violent clashes and rioting. The mayor in her tweet also said she was activating the Washington National Guard to support the Metropolitan Police Department.

However, just hours before the curfew was set to start, peaceful protests escalated into tense standoffs with police, with many flocking to Lafayette Square, just steps from the White House. Numerous photos and video footage circulating online show police firing rubber bullets, tear gas, and pepper spray in an effort to disperse large crowds of protesters there and on surrounding streets.

Washington police said Sunday night that they were responding to “multiple fires intentionally set” around the city, including one reported at St. John’s Episcopal Church on H Street NW, a historic landmark located just across the street from the White House. Officials warned people to avoid the area. The fire has since been extinguished.

Police told USA Today that two Target stores in the Lafayette area had been broken into. The publication reported that an American Federation of Labor and Congress of Industrial Organizations (AFL-CIO) building was also set on fire and vandalized, with protesters smashing the windows of the building.

Democratic strategist and consultant Adam Parkhomenko tweeted that it “looks like a war zone outside the White House,” along with a short video showing fire and thick smoke behind graffiti-covered cement barriers. Numerous businesses downtown had boarded up doors and windows in the area in anticipation of a night of looting.

According to The New York Times, Secret Service agents also rushed President Trump to a Presidential Emergency Operations Center, known as the White House bunker, on Friday night, amid the escalating violence outside. The Epoch Times has been unable to verify this.

Trump tweeted Sunday that, “80% of the RIOTERS in Minneapolis last night were from OUT OF STATE,” and said they were “harming businesses (especially African American small businesses), homes, and the community of good, hardworking Minneapolis residents who want peace, equality, and to provide for their families.”

The president said much of the chaos throughout the United States was being steered by “ANTIFA led anarchists, among others,” and announced his administration would be designating Antifa as a terrorist organization.

Widespread protests have broken out across the United States in recent days following the death of Floyd, a 46-year-old black man whom police sought to arrest outside a south Minneapolis grocery store on Memorial Day for alleged fraud.

A citizen’s cellphone video showed an officer—who has since been identified as 44-year-old Derek Chauvin—kneeling on Floyd’s neck for almost 9 minutes as Floyd repeatedly said he couldn’t breathe and begged officers not to kill him. He eventually became unresponsive, with one witness noting that his nose was bleeding. The footage spread quickly on social media.

Floyd, a father of two, was pronounced dead May 25 after he was taken into custody by authorities, and on May 26 all four officers involved in Floyd’s arrest—Chauvin, Thomas Lane, Tou Thao, and J. Alexander Kueng—were fired from the Minneapolis Police Department, according to a news release issued by the Minneapolis Department of Public Safety.

Chauvin has been arrested and charged with third-degree murder and is expected to appear at the Hennepin County Court on Monday.