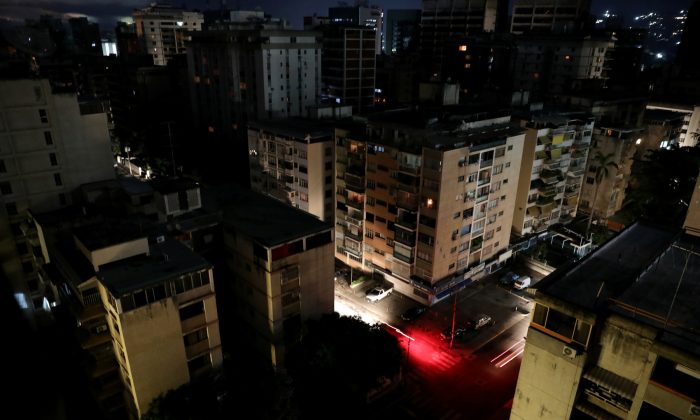 A general view is seen during a blackout in Caracas, Venezuela July 22, 2019. (Reuters/Manaure Quintero)
Americas

CARACAS—More than half of Venezuela’s 23 states lost power on July 22, according to witnesses and reports on social media, a blackout the government blamed on an “electromagnetic attack.”

It was the first blackout to include the capital, Caracas, since March, when the government blamed the opposition and United States for a series of power outages that left millions of people without running water and telecommunications.

The blackouts exacerbated an economic crisis that has halved the size of the economy.

Venezuelan Information Minister Jorge Rodriguez said the outage on Monday was caused by an “electromagnetic attack,” without providing evidence. He added that authorities were in the process of re-establishing service.

Power returned for about 10 minutes to parts of southeastern Bolivar state, site of the Guri hydroelectric dam – the source of most of Venezuela’s generation – but went out again, according to a Reuters witness. Electricity was still out throughout Caracas.

“It terrifies me to think we are facing a national blackout again,” said Maria Luisa Rivero, a 45-year-old business owner from the city of Valencia, in the central state of Carabobo.

“The first thing I did was run to freeze my food so that it does not go bad like it did like the last time in March. It costs a lot to buy food just to lose it,” she said.

The oil-rich country’s hyperinflationary economic crisis has led to widespread shortages in food and medicine, prompting over 4 million Venezuelans to leave the country.

Venezuela’s national power grid has fallen into disrepair after years of inadequate investment and maintenance, according to the opposition and power experts.

“These blackouts are catastrophic,” said 51-year-old janitor Bernardina Guerra, who lives in Caracas. “I live in the eastern part of the city and there the lights go out every day. Each day things are worse.”