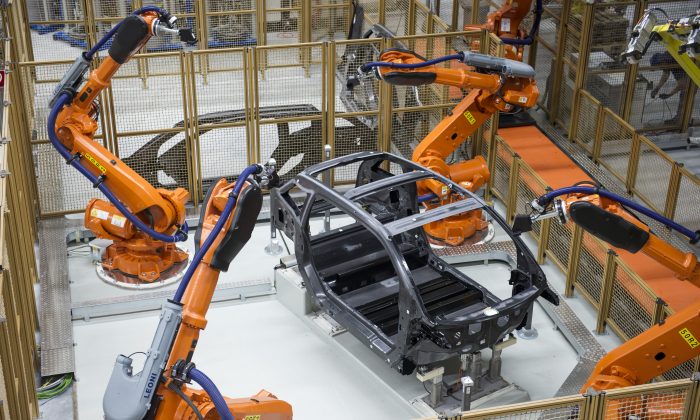 Robots manufacture a carbon chassis of a new BMW i3 electric car on the assembly line at the BMW factory on September 18, 2013 in Leipzig, Germany. (Jens Schlueter/Getty Images)
Business & Economy

In economics, nobody likes it but everybody has to live with it: uncertainty. It makes business decisions difficult and wreaks havoc on economic models. This is why mainstream economics oftentimes ignores it and assumes we have complete certainty in economic planning.

Not so for Horace “Woody” Brock. A mathematical economist by training, he embraced Economics of Uncertainty and founded his consulting firm Strategic Economic Decisions after doing extensive research at Stanford University.

His most recent book is titled “American Gridlock,” where he proposes common sense solutions to economic crises.

The distribution of consumption is morally the only thing that matters.

Epoch Times spoke to Woody Brock about why infrastructure spending is the magic bullet to rekindle growth in the United States and why China has overdone it; why workers don’t need to fear competition from robots; how the standard of living for the average person is actually rising despite an increase is income inequality; and how China needs to completely change its economic model to reach the next stage.

Epoch Times: The workers in America fear that one day machines will take over their jobs. You have done a lot of research on the topic and say this is not true.

Farmers, manufacturing workers, and most importantly, domestic servants, there are none. My mother ended up cooking her own dinner and hated it.

But the unemployment rate did not go up even though we lost 83 percent of our jobs because new work came in. What you did changed, and the price changed. But the general equilibrium theory is that under rough approximations, in a competitive economy with no government setting minimum wages, in a correct economy, all markets clear. This works including in the labor market, with frictional unemployment around.

Prices will set according to supply and demand; there is no excess copper, there are no excess workers. Over the 100 years when we lost our jobs, the unemployment rate went from 6 percent to 4 percent. And the work week, which John Maynard Keynes thought would shrink and people would work one or two days a week because they would prefer leisure time, went up by two hours.

Wealth’s not needed to be able to take your family out to dinner once a week.

This is what general equilibrium theory predicts.

What do robots do to the economy? Here is the point: What robots do is only one thing—they shift supply functions outward. That is to say, you invest in a new machine that lets you, a doctor, operate on two kidney transplants at once.

Mathematically and conceptually, at a given wage rate you can now do twice as much as before. That is an outward shift in the supply curve. That is when machines complement human skills.

When they substitute for them, innovation comes in and the typist is now a word processor who is much more efficient. Therefore, a typist couldn’t earn a living because it’s uncompetitive.

Regardless of wages, living standards go up and up.

So in principle, the theorem is, no matter what you do to the supply functions, move them out or backward, as long as the supply curve goes up and the demand curve goes down, then you will have prices that clear markets, including the labor market.

Epoch Times: You just have to let the market do its job?

Mr. Brock: If you don’t screw it up by protecting the older workers, preventing typists from being fired, and demanding minimum wages of $1,000 a minute, the invisible hand will work.

People will be hurt if the rate of technological substitution is fast, but government should pay for that.

Help them out. But don’t hurt the person opening a McDonald’s. He can’t pay $38 an hour minimum wage. But people keep hoping you can make the businessman pay. All that does is violate general equilibrium.

Epoch Times: What about wage rates, won’t they go down?

Mr. Brock: The general equilibrium merely says you will have market clearing. The question being at what wage and what kinds of new jobs. This has been addressed only by David Autor, MIT, and myself.

Regardless of wages, living standards go up and up.

So wages will go up and for obsolete jobs they will go down. For manual jobs and many different jobs they will stay the same in real terms. In other words, life will be fine.

Regardless of wages, living standards go up and up. This is another huge misunderstanding today.

In the bottom fifth of the population, they never had any wealth, but they are now enjoying things only the Rockefellers enjoyed previously.

The distribution of living standards is much fairer and it constantly rises as does the life expectancy of both the rich and the poor because of the general equilibrium solution.

The academics, all of whom are left-wing and hate business, only want to look at the distribution of wealth. The poor people never had any wealth. Wealth’s not needed to get a flu shot to live and not die.

Wealth’s not needed to be able to take your family out to dinner once a week. No longer chicken chop-suey. Now Thai food one week, Mexican food, Italian food, Lebanese food—average nobodies can do this. Only aristocratic families used to be able to do that.

Some aristocrats live much worse than before because you never again will hear the four most important words in life, ever: “Madam, dinner is served.”