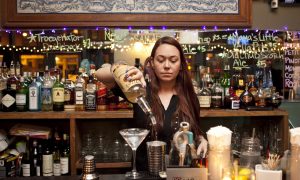 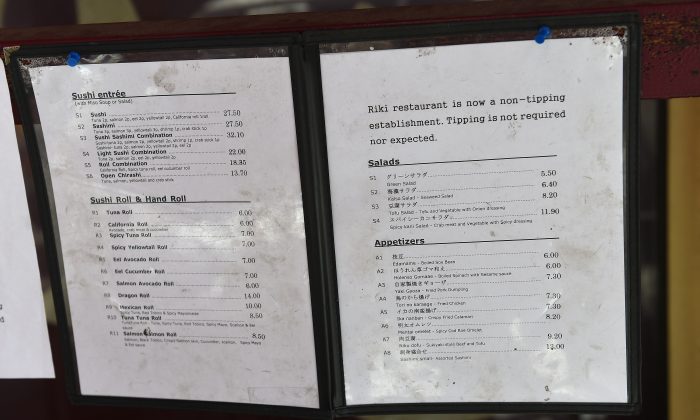 A menu displays a non-tipping policy in front of Japanese restaurant Riki in New York on May 1, 2014. A number of restaurants across the United States have decided to discourage patrons from tipping and to include the service charge in the bill. (Emmanual Dunand/AFP/Getty Images)
Opinion

Why We Should Get Rid of Tipping

Tipping is widespread across North America. The place where the most people tip is in restaurants and bars, but the practice is increasingly common in other walks of life where a service is provided.

The growing list of places where consumers are expected to leave a tip is adding to the confusion already endemic to the custom. It poses puzzling questions for customers, adds instability to employee earnings and, ironically, LEADS

to worse service at businesses.

That’s why we should consider eliminating the tip.

The problem for many customers is that tipping is confusing since the rules are not clear and payments are arbitrary. Many people agree the “standard” tip is 15 percent, though increasingly consumers are “asked” to offer much more.

Many people agree the tip rate for large groups should often be higher, but how many people constitute a “large” group? Most importantly, tipping means doing math, which is a difficult task for some people and more challenging after drinking a few pints of beer or glasses of wine.

While tipping is confusing and difficult for customers, it is also problematic for the workers being tipped. Employees in other occupations know their pay rate before starting work. Waiters, waitresses, and bartenders, on the other hand, often have no idea how much they will earn from a day’s labor.

Occasionally, servers hit the jackpot and pick up a giant tip. A server at a nightclub in Connecticut received almost $25,000 from a single tip for a few hours of work when a sports team purchased a giant bottle of champagne (and was forced to pay an automatic 20 percent for the service).

A more common experience, however, is for servers to be given little or no tip when customers are angry about their dining experience or when foreign visitors, accustomed to no tipping rules back home, are served.

How Restaurant Economics Led to Tipping

One reason tipping was created was because of the economic nature of restaurants and bars, which are unique high-risk and high-reward businesses. Most, in fact, fail.

Fair Issac, which invented the FICO credit score, looked at failure rates among 89 industries and ranked restaurants and bars among the 10 riskiest, while Small Business Administration data shows only about half of all restaurants and hotels survive more than six years.

When they survive, restaurants often have very high gross profit margins, the highest in the entire retail category. There are relatively few other businesses where only a few dollars of ingredients can be transformed using skill, knowledge, time and energy into amazing and expensive products. For example, the other day my server convinced me to buy—for “only $5.99″—a gorgeous slice of chocolate cake for dessert. That slice cost around 25 cents to make, resulting in an exceptionally high markup.

The industry, however, is very high risk as well. Since, eating out is a discretionary and relatively expensive activity that can be done at a much cheaper price at home, one of the first things people cut back on when an economy slumps is dining out.

Moreover, there are few barriers to entry in the restaurant business since opening an eatery takes no special degree or required training. Anyone with an idea and a passion to cook can set up shop. This means highly successful restaurants often find competitors opening up quickly nearby to steal away customers and profits.

To reduce these risks, the restaurant business managed to convince customers that they are responsible for both evaluating and paying the wages of their serving staff. That reduces the businesses’ direct labor costs, lowering the risk of them failing.

So tips, instead of acting as an incentive, simply shift the burden of paying workers from the business owner to the customer. This shifting has become enshrined in labor law. For example, federal minimum wage laws allow servers to be paid just $2.13 per hour as long as the rest is made up in tips, ensuring the more customers tip, the less restaurant owners need to pay.

And that disconnect between the tip and service defeats the entire purpose of the practice. The tip was historically a small token payment, designed to ensure “promptitude”—or promptness.

Today’s tips, however, are not an effective method of motivating servers because tips are given at the end of the meal, not at the beginning. It is hard to motivate servers when they have no idea how large an incentive payment they will receive.

This problem is borne out by research that found “tipping was not significantly related to servers’ or third-parties’ evaluations of the service.” Many people tip the same amount whether the service is good or bad.

The Benefits of Eliminating the Tip

What is another option instead of discretionary tipping? In some countries such as Japan, there is no tipping or service charge in restaurants. Instead, servers are paid by the company and the price of food and drink is adjusted to account for the extra labor costs.

Shifting to a model where labor costs are built into food and drink prices has many benefits. First, it shifts risk away from workers by eliminating uncertainty and by providing more stability in a server’s pay.

Fluctuating pay results in restaurants and bars primarily seeing applicants for server jobs who like, or are able to tolerate, ever-changing compensation. Switching to a system of stable pay will help restaurants by expanding the pool of potential applicants to include those who NEED MORE INCOME

Second, building labor costs into menu prices reduces confusion, uncertainty, and the need for diners to do math. Eliminating all of these enhances the dining and drinking experience, increasing the desire to eat out and likely boosting the average check size.

Moreover, providing servers with more stable incomes should result in fewer servers quitting over pay issues and concerns. Service quality improves the longer waiters, waitresses, and bartenders stay on the job, since these occupations are far more complicated than they first appear.

Finally, given some of the tips paid in cash are not declared on a person’s taxes, shifting to a no-tipping model raises government revenues by reducing the underreporting of income.

Shifting away from a model of discretionary tipping to a model where labor costs are built into menu prices is likely a win for servers, restaurants, customers, and the government. Eliminating tipping is a way for restaurants, diners, and servers to have their cake and eat it too.

Jay L. Zagorsky is a research scientist at The Ohio State University. This article was previously published on TheConversation.com.