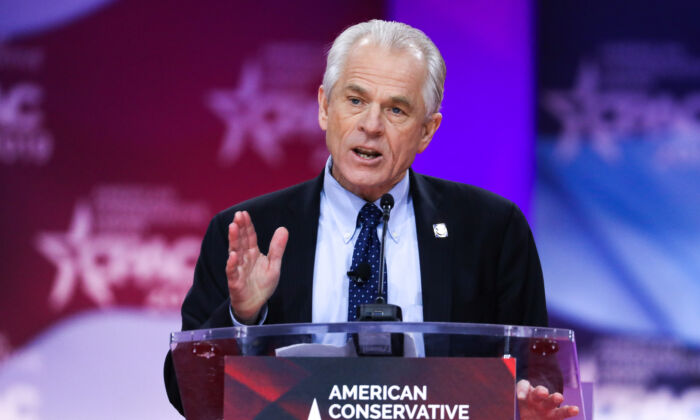 Frank Fang
journalist
Frank Fang is a Taiwan-based journalist. He covers US, China, and Taiwan news. He holds a master's degree in materials science from Tsinghua University in Taiwan.
View profile
Follow
and Steve Lance

“I call it the Achilles’ heel of the boss. I love the boss despite these bad personnel. He’s the best president we’ve ever had,” Navarro said, referring to Donald Trump, during a recent interview on the “Capitol Report” program on NTD News, a sister media outlet of The Epoch Times.

He added that Trump’s 2020 presidential election campaign must not be the “prologue” of a potential 2024 run for the presidency.

Navarro was sharing what he wrote in his new book, “Taking Back Trump’s America: Why We Lost the White House and How We’ll Win,” which is set to be published on Sept. 20.

In his book, Navarro wrote about how Trump, soon after becoming elected, began surrounding himself with “globalists, Never-Trump Republicans, wild-eyed [House] Freedom Caucus nut jobs,” and “Wall Street transactionalists,” who would “come to plant so many poisonous Bad Policy Trees” during his administration.

Navarro, who said he was one of three senior advisers that stayed with Trump from the 2016 campaign until the transition of power, added that he “pulls no punches” in his book when commenting on Trump’s mistakes in personnel choices.

During the interview, Navarro named Rex Tillerson and Jim Mattis, Trump’s first secretary of state and secretary of defense, respectively, as examples of Trump’s “stupid choices” in what would become part of what he called a “Cabinet of Clowns.”

According to his book, Tillerson and Mattis had opposed Trump’s effort to renegotiate a trade deal with South Korea, on the grounds that doing so could upset either “the delicate military calculus” or “diplomatic alliance” between the two nations.

Despite their opposition, Trump and then-Korean President Moon Jae-in signed a revised free trade agreement in September 2018, which was welcomed by U.S. automakers and meat exporters.

Trump had said the old agreement, which was approved by Congress in 2011 and went into effect the following year, was a “horrible deal” made by Hillary Clinton, who promoted the final version of the trade pact as secretary of state under the Obama administration.

One of the “Never-Trumpers” Navarro mentioned in his book was Steven Mnuchin, former secretary of the treasury under the Trump administration.

Navarro said Mnuchin and Trump’s son-in-law Jared Kushner, “single-handedly destroyed” Trump’s China policy “with their back dealings with Wall Street and the Communist Chinese themselves.”

“They did it for simply to feather their own nests,” Navarro said.

In his book, Navarro wrote that Mnuchin “always refused” when Trump asked his treasury secretary to label China as a currency manipulator. Mnuchin eventually agreed to slap such a label on China on Aug. 5, 2019.

However, Navarro said the timing was too late. He explained in his book that if Mnuchin had agreed to make the designation against China in January 2017, it would “have struck right at the heart of one of the worst abuses of Communist China,” and it would have given U.S. officials “an invaluable bargaining chip for the China trade negotiations.”

The Chinese Communist Party (CCP) didn’t fulfill its promises under the trade deal. According to the Peterson Institute for International Economics (PIIE), China bought only 57 percent of the U.S. exports it had promised to buy.

“The reality of that deal was the skinny deal. That’s what it was,” Navarro told NTD. “It was a pale shadow of what it should have done.”

Navarro said Kushner was at fault for the bad trade deal.

“He was double-dealing with Steve Schwarzman on Wall Street and John Thornton, these guys, along with the Chinese Communist Party negotiators, behind the backs of me and [former U.S. Trade Representative Robert] Lighthizer, and even the president to come up with this bad deal,” Navarro said.

Schwarzman is the chief executive officer of U.S.-based investment firm The Blackstone Group, and Thornton is the executive chairman of Canada-based mining company Barrick Gold and a former Goldman Sachs president.

However, Kushner gave a different account of how Thornton became involved in the trade negotiations. According to his new book, “Breaking History: A White House Memoir,” Kushner said he contacted Thornton at the request of Lighthizer and Mnuchin.

Thornton had “high-level contacts in China,” Kushner’s book says, and the former Goldman Sachs president would eventually be the one passing on a U.S. trade deal proposal to the Chinese side, before the deal was formally signed.

Additionally, Kushner described the trade deal as a “win” for the United States, since China agreed to buy more U.S. agricultural products and made concessions.

If Trump were to become president again, Navarro suggested the United States should decouple from China.

“I can assure you one of the first things he’s going to do … is lockout tariffs on Communist China,” Navarro said. “We’ll just cut the cord from them because every dollar we pay at Walmart for made-in-China, made-in-Communist-China product, it goes into their military war machine to take out Taiwan.”

“I think it’s really important if we’re going to win back the White House 2024, that we govern over the next four years in a way which gets things done,” Navarro continued. “Time is precious, when you’re in the White House, as we learned, and there were things we left on the table that I wish we hadn’t.”

The Epoch Times has reached out to Mattis, Mnuchin, Kushner, Schwarzman, and Thornton for comment.

This article has been updated with excerpts from Jared Kushner’s new book, which was published in August.